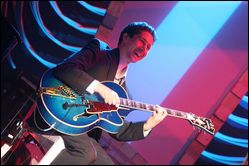 Randy Napoleon (born 30 May 1978) is an American jazz guitarist, composer, and arranger who is a member of the Freddy Cole Quartet and the leader of a sextet, a quartet, and a trio.[1][2]

He toured with Benny Green, the Clayton-Hamilton Jazz Orchestra led by John Clayton, Jeff Clayton, and Jeff Hamilton, and with Michael Bublé.[1][3][4]

He is Assistant Professor of Jazz Guitar at Michigan State University.[5]

Napoleon was born in Brooklyn, New York, on May 30, 1978. He is the son of Greg Napoleon, a software engineer, and Davi Napoleon, a theater historian and arts journalist, and the grandson of Jack Skurnick, a musicologist and founder of EMS Recordings, and Fay Kleinman, a painter. He has one younger brother, Brian Napoleon. His family moved to Ann Arbor, Michigan, when he was two years old.[6] He studied violin in the Ann Arbor schools before discovering the guitar.[7]

He married Alison Rogers in 2010. They have two children, Jack, named after Jack Skurnick, and Juliet.[8] One of Napoleon's formative experiences was in a big band at Ann Arbor Pioneer High School,[9] led by trumpeter Louis Smith (musician). He also played at the jazz clubs in Ann Arbor and learned from jam sessions at the defunct Bird of Paradise Club, where he heard many jazz musicians. Early opportunities at the Del Rio, a local bar, and at events sponsored by WEMU, a local NPR jazz radio station, helped start his career.[6] Napoleon studied at the University of Michigan School of Music.[3] He moved to New York City after graduating in 1999 and lived there until 2014, when he moved to East Lansing, Michigan.

He has led an organ trio which has toured the United States and United Kingdom and which did a concert for BBC radio. The trio appears on Enjoy the Moment and Randy Napoleon: Between Friends, both featuring organist Jared Gold and drummer Quincy Davis. Between Friends, a 2006 release from Azica Records, features the trio on half the tracks and a quartet on the other, with Davis, bassist David Wong, and Benny Green on piano.[3][4] The Randy Napoleon three-horn sextet appears on his 2012 album The Jukebox Crowd. A trio with Rodney Whitaker on bass and Gregory Hutchinson on drums appears on his album for the Detroit Music Factory, Soon.[10]

Napoleon tours internationally with singer and pianist Freddy Cole.[1][2] He is the guitarist on Cole's 2009 album The Dreamer in Me and performs on and arranged the music for Cole's album, Freddy Cole Sings for Mr. B. (2010), and Talk to Me (2011). He has appeared on TV with Cole, on a 2007 PBS special, and on the 2009 Jerry Lewis Muscular Dystrophy Telethon.

Napoleon has also toured with Benny Green (2000–2001), Clayton-Hamilton Jazz Orchestra (2003–2004), and Michael Bublé (2004–2007). He has appeared on TV in Japan with CHJO and throughout Europe and the U.S. with Bublé. His U.S. TV appearances with Bublé include David Letterman, Jay Leno, The View, The Today Show, The Ellen DeGeneres Show, Regis and Kelly, Dancing with the Stars, the Radio Music Awards, Entertainment Tonight, and a PBS special, Caught in the Act.[3][4][6]

Napoleon has performed with Bill Charlap, Monty Alexander, and Rodney Whitaker. He has appeared with Eric Comstock and Barbara Fasano and has worked with musicians from his own generation, such as Josh Brown (trombone), Gerald Clayton and vocalists Melissa Morgan and Sachal Vasandani.[3]

He is an assistant professor at Michigan State University in the College of Music and performs with the MSU Professors of Jazz. He was on the faculty of the University of Michigan School of Music, Theatre and Dance from 2013–2014, where he taught jazz guitar. He has taught master classes and clinics at Bucknell University, Temple University, Humber College, and Oakland University.[11][12]

Napoleon's work has been acclaimed from coast to coast and in many countries, both as a leader and as an accompanest to singers such as Buble and Cole.

In the November 2012 issue of Hot House Jazz Magazine, George Kanzler wrote "...Napoleon is better known as a super-sideman than a leader...his latest CD, The Jukebox Crowd, showcases his crisp, suave playing, which mixes plectrum and finger-picking styles in a sextet with three horns and Hammond B3 organ..." Also writing about The Jukebox Crowd in the November 2012 issue of New York City Jazz Record, Ken Dryden wrote, "Many young up-and-coming jazz artists focus on showcasing themselves by playing blazing uptempo solos. Yet guitarist Randy Napoleon, who has toured with the Clayton-Hamilton Jazz Orchestra and Freddy Cole, is quite comfortable emphasizing melody and space in his playing."

On April 22, 2012, in Philadelphia Weekly, David R. Adler noted that this album suggested that Napoleon is more than a sideman. "From Randy Napoleon's boyish appearance one might think he's just starting out," he said. "In fact, he's one of the more accomplished and well-rounded jazz guitarists of our day. Most know him as a supremely tasteful accompanist to singers such as Michael Bublé, Eric Comstock and Freddy Cole (Nat's younger brother). But his penchant for bluesy soul-jazz comes through on his latest, The Jukebox Crowd, a sextet affair with Hammond organ and plenty o' horns. He can also cut it in lean and modern post-bop settings, judging from organist Jared Gold's 2008 smoker Solids & Stripes."[13]

An earlier album, Between Friends, was also well received. "Napoleon plays with a gentle, purring tone that makes you lean in close to hear its range of color and articulation, and his improvisations are true narratives, a collection of shapely melodies rather than a series of prepackaged licks," wrote Mark Stryker in [The Detroit Free Press]].[14]

"Napoleon must be considered in the first rank of modern jazz guitarists," wrote Piotr Michalowski, in a periodical of the Southeast Michigan Jazz Association[15]

"Napoleon consistently shows that he is in full command of his instrument without resorting to overindulgent solos like many young players...Napoleon's tasty, spacious interpretation of the magical ballad "A Time for Love" is yet another highlight...The subtle opener, "Face the Truth," is a conversational piece that might appeal to a singer if it only had a lyric," wrote critic Ken Dryden in Allmusic[16]

Napoleon has also been sited for his work as a sideman. In a review of the CD, Freddy Cole: Talk to Me: "John DiMartino's supportive piano and Randy Napoleon's golden-toned guitar lines carry Cole or frame him in all the right places." Kirk Silshee, Down Beat Magazine, November 2011, page 59. In the November 2011 issue of Vintage Guitar magazine, in a review of Freddy Cole's album, 'Freddy Cole Sings Mr. B,' Dan Forte wrote: "Napoleon arranged 10 of the album's 12 songs – handling the doubly daunting task of doing justice to Cole's voice (very similar to his legendary brother, the late Nat "King" Cole) as well as songs associated with Cole's friend and mentor, Billy Eckstein. The Brooklyn native approaches these chores with the same sensitivity and insight he brings to his guitar playing – from the solo arpeggios that support Cole's honey-toned vocal on "Tender Is the Night" to the octave runs that follow, as the ensemble joins in to establish a relaxed, swinging groove, before he trades a tasty single-note solo with special guest Houston Person's tenor sax. For "Cottage for Sale," the sad tale of a dream cottage now abandoned, Cole asked for a George Shearing feel, and Napoleon cleverly references the optimistic "Folks Who Live On the Hill" in the intro...Throughout, he coaxes a warm but round tone from his Stadler archtop (a 17" Free Verse with floating humbucker) and reveals his biggest influences, Wes Montgomery and Joe Pass. Others "who swing and have a deep blues feeling" – including Benson, Barney Kessel, Grant Green, and Charlie Christian – are evident on "Jelly, Jelly." A fitting tribute to them and, of course, to Mr. B."[17]

In a review of Bitter/Sweet, Bart Greenberg wrote, "The splendid young guitarist, Randy Napoleon, matches Comstock's moods, now pensive, now joyful. He gets to do some celebrating of his own on the Rodgers and Hart track, while showing a delicacy of feeling on such tracks as "A Nightingale Sang in Berkely Square" [18] And in the April 2011 issue of Cabaret Scenes, Elizabeth Ahlfors provided background and insight. "Randy Napoleon has his own trio and is part of the Freddy Cole Quartet, playing the guitar with a subtle finesse and articulation that partners Comstock's baritone voice and astute understanding of the song's intent," she wrote. "The two (Comstock and Napoleon) bring additional layers to the arrangements and a singular intimacy to Rodgers and Hammerstein's "I Have Dreamed," Napoleon enhancing the Rodgers melody with spare elegance. Vocal and instrument together evoke the dark heartache of Gordon Jenkins's "Goodbye" and are persuasive with the compelling phrasing in "If I Had You" (Shapiro/Campbell/Connelly), once a hit for the King Cole Trio. Lane and Lerner's melodic "Too Late Now" hints of a sweet desperation." [19]

Will Friedwald, Wall Street Journal jazz critic, said in the liner notes for Bitter/Sweet that "sometimes you can add something by taking something away (sounds very Zen, I know)...Eric without the piano is an even more intimate and personal experience than Eric at the keyboard. It makes his considerable gift sound even more rarified and specialized, and empowers him to pinpoint microscopic shades of emotion with even greater accuracy. Randy Napoleon's guitar is absolutely ace...Sometimes less is more. The combination of Comstock and Napoleon is so perfect, I have to ask: Who could settle for anything less?"

Most critics have reviewed Napoleon in performance, not on recordings. On April 16, 2012, Tim Wilkins wrote in the New Jersey Star-Ledger "Guitarist Randy Napoleon's lyrical solo lines strike a sweet spot between virtuosity and emotion."[20]

Perhaps one of the most important comments came from fellow guitarist, George Benson, in Vintage Guitar Magazine, March 2010:

In a review of The Freddy Cole Quartet at the Umbria Jazz Festival, "Napoleon's light touch got caught up in a whirl of lightning-fast technique. His solos then became the ones to watch for: golden lyricism on "If I Love Again", according to Michael J West. "Sweet, happy variations on "Getting Some Fun Out of Life"; plainspoken, chromatic nostalgia on "Funny How I've Stopped Loving You" (on which his bandmates also took some bows, Boyd with beautiful brushwork and Bailey with imaginative eighth-note accents). He outdid himself during the set's encore with a concise but brilliant submission on "I Was Wrong." [25]

In a review of the Dec 15, 2007 performance of the Freddy Cole Quartet in South Orange New Jersey: "In the instrumental interludes, the Freddy Cole quartet plays swinging mainstream jazz that is always accessible and interesting...with some superb guitar work from Napoleon, who was simply sensational throughout the evening...Napoleon has been with the group only a few months, but has already become an important part of what they provide musically..." Joe Lang, Jazz Improv NY, Jan. 2008 issue.[26]

In a review of the Jan 22, 2009 performance of the Freddy Cole Quartet at St. Cecilia's in Grand Rapids, Michigan: "His quartet includes three fabulous players...who play with no unnecessary gestures, no wasted notes...Guitarist Randy Napoleon, a finger-style player with a soft, smooth touch, meshed perfectly with Cole's piano, whether trading fills or sharing the melody in octaves. When Cole stepped away from the keyboard, Napoleon filled in all the space without missing a trick, delivering thick, chord-rich solos on tunes such as 'I Will Wait For You.'" Jeffrey Kaczmarczyk, The Grand Rapids Press.[27]

In a preview of a 2007 appearance of the Randy Napoleon Trio in Pittsburgh, reviewer Bob Karlovits commented on Napoleon's recent album. "His melodic lines are clean and uncomplicated. He shows a sensitivity for song rather than a desire to show off." Pittsburgh Tribune-Review[28]

"Napoleon at times searches, not for the big fat notes, but the tiniest, trim, lean and bittersweet ones. His heaviness lies not in volume or weight, but in depth of spirit," wrote Michael G. Nastos, WEMU radio host[29]

"Each note hangs, suspended with raindrop clarity from its bough of melody, on up-tempo tunes as well as ballads." Lawrence Cosentino, Lansing Michigan's City Pulse.[30]

This article uses material from the article Randy Napoleon from the free encyclopedia Wikipedia and it is licensed under the GNU Free Documentation License.