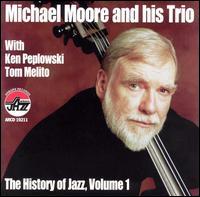 Moore started on bass at age 15, at Withrow High School in Cincinnati, where he performed in various ensembles as well as the Presentation Orchestra in George G. "Smittie" Smith's famed The Withrow Minstrels. He played with his father in nightclubs in Cincinnati. He attended the Cincinnati College Conservatory, playing with Cal Collins and Woody Evans locally. He toured Africa and Europe with Woody Herman in 1966, and recorded with Dusko Goykovich while in Belgrade.

In the 1970s he worked with Marian McPartland, Freddie Hubbard, Jim Hall, Jimmy Raney, Bill Evans, Benny Goodman, Jake Hanna, Warren Vache, Herb Ellis, Zoot Sims, Ruby Braff, George Barnes, Chet Baker, and Lee Konitz. In 1978, he auditioned and was hired by Bill Evans after longtime bassist, Eddie Gomez had left the group and Evans was in transition with drummer, Philly Jo Jones. Moore however, left after 5 months due to dissatisfaction with the group. Late in the decade he began working with Gene Bertoncini, with whom he would play into the 1990s. In the 1980s he worked with Sims again as well as with Kenny Barron and Michael Urbaniak.

Moore was a member of the Dave Brubeck Quartet from 2008 until Brubeck's death in 2012.

With Art Farmer and Jim Hall

With Jimmy Raney and Doug Raney

This article uses material from the article Michael Moore (bassist) from the free encyclopedia Wikipedia and it is licensed under the GNU Free Documentation License.