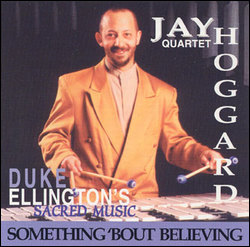 Jay Hoggard was raised in a religious family. He was born in Washington, D.C. but grew up in Mount Vernon, New York. His mother taught him how to play piano at a young age. At age 15, Jay started to play the vibraphone.[1]

Hoggard first played piano and saxophone before picking up vibraphone.[2] He played with Anthony Davis and Leo Smith in the early 1970s in New England, and after moving to New York City in 1988, he worked again with Davis and with Chico Freeman, Sam Rivers, Cecil Taylor, James Newton, and Kenny Burrell. Since then Jay has performed with famous vibraphonists Lionel Hampton, Milt Jackson, Tito Puente and Bobby Hutcherson. He has collaborated with Kenny Burrell, Billy Taylor, James Newton, Hilton Ruiz and Oliver Lake.

Hoggard has played in venues in Africa, South America, Europe, Asia and the Caribbean. In the United States he has performed at the Kennedy Center in Washington D.C., the Lincoln Center in New York City, and the Schomburg Center for Research in Black Culture also in New York City. Jay has performed at numerous jazz festivals including St. Lucia, Montreux, Mount Fuji, Pori and Hartford, CT. He has appeared on television on CBS Sunday Morning and BET Jazz.

Hoggard has recorded many dates as a leader, including several that have been commercially successful in the U.S. He graduated from and is currently Adjunct Professor at Wesleyan University.

This article uses material from the article Jay Hoggard from the free encyclopedia Wikipedia and it is licensed under the GNU Free Documentation License.

Manuel de Falla Nocturno für Klavier
Update Required To play the media you will need to either update your browser to a recent version or update your Flash plugin.