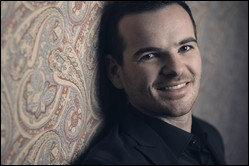 Bringuier is the fourth child in a family of musicians, including his brother Nicolas Bringuier, a pianist. At age 5, Bringuier began musical studies at the Nice conservatory, where he won several first prizes. At age 13, in February 2000, he was admitted to the Conservatoire national supérieur de musique et de danse de Paris, where he continued his studies in cello and in conducting.[1] His teachers there have included Philippe Muller. At the Conservatoire de Paris, he then began conducting studies, where his teachers included Zsolt Nagy. Bringuier graduated cum laude from the Conservatoire de Paris with diplomas in cello studies and conducting in June 2004. Bringuier has performed in a cello-piano duo with his brother Nicolas.

In 2005, Bringuier became assistant conductor with the Ensemble Orchestral de Paris. That same year, he won the 49th International Besançon Competition for Young Conductors.[2] In 2007, Bringuier became associate conductor of the Orchestre de Bretagne. In the USA, Bringuier took up the post of assistant conductor of the Los Angeles Philharmonic in 2007, appointed by Esa-Pekka Salonen. During the subsequent music directorship of Gustavo Dudamel, Bringuier was promoted to associate conductor, and later, to resident conductor (the first person to hold this title in the orchestra's history). He stood down from this post after the 2012-2013 season.

This article uses material from the article Lionel Bringuier from the free encyclopedia Wikipedia and it is licensed under the GNU Free Documentation License.

Johann Peter Salomon Romanze für Violine und Streicher D-Dur
Update Required To play the media you will need to either update your browser to a recent version or update your Flash plugin.