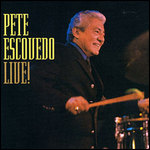 Escovedo participated in the San Francisco music scene for several decades. In 2002, he appeared on the "By the Hand of the Father" episode of the PBS series Austin City Limits.

This article uses material from the article Pete Escovedo from the free encyclopedia Wikipedia and it is licensed under the GNU Free Documentation License.