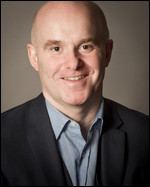 born in 1968 in Birmingham, United Kingdom

Laurence Cummings (born 1968, Birmingham), MA (Oxon), ARCM, FRCO, HonRAM is a British harpsichordist, organist, and conductor. He is noted as a conductor of the music of Handel.

Cummings was educated at Solihull School, Christ Church, Oxford and the Royal College of Music. His teachers have included Jill Severs.

Cummings has played harpsichord and organ continuo with many leading period instrument groups, including Les Arts Florissants, The Sixteen Choir, Gabrieli Consort and Orchestra of the Age of Enlightenment.

Cummings has recorded commercially as both an instrumentalist and a conductor.[3] His recordings as a conductor have included the first recording of Handel’s newly discovered Gloria with soloist Emma Kirkby and the Royal Academy of Music Baroque Orchestra. He has also made recordings of keyboard works of Louis and François Couperin, and Handel.[4]

This article uses material from the article Laurence Cummings from the free encyclopedia Wikipedia and it is licensed under the GNU Free Documentation License.