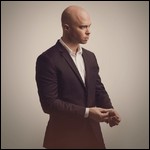 born in 1979 in Lausanne, VD, Switzerland

Christian Chamorel (born 1979, in Lausanne) is a Swiss pianist.

He was trained at Lausanne, Munich and Zürich's Conservatories, graduating in 2004 and 2006; while a student he was prized by the Yamaha, Leenaards and Kiefer Hablitzel foundations. He has performed through Western Europe since. Chamorel had his recording debut in 2005 with a Franz Liszt monographic; that same year he was prized by Geneva's Societé des Arts.

This article uses material from the article Christian Chamorel from the free encyclopedia Wikipedia and it is licensed under the GNU Free Documentation License.