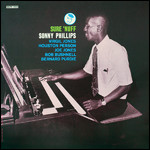 Sonny Phillips (born December 7, 1936) is an American jazz keyboardist. His primary instrument is electronic organ but he often played piano.

Phillips began playing jazz organ after hearing Jimmy Smith in his twenties. He studied under Ahmad Jamal, and played in the 1960s and 1970s with Lou Donaldson, Nicky Hill, Eddie Harris, Houston Person, and Gene Ammons. His debut album was released in 1969, and he released several further records as a leader before suffering a long illness in 1980. He went into semi-retirement after this and moved to Los Angeles; since then he has performed and taught occasionally.

This article uses material from the article Sonny Phillips from the free encyclopedia Wikipedia and it is licensed under the GNU Free Documentation License.

Carl Stamitz Klarinettenkonzert Nr. 7 Es-Dur
Update Required To play the media you will need to either update your browser to a recent version or update your Flash plugin.