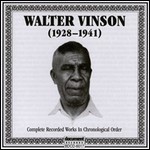 Walter Vinson (February 2, 1901 – April 22, 1975) was an American Memphis blues guitarist, singer and songwriter.[1] He was a member of the Mississippi Sheiks, worked with Bo Chatmon and his brothers, and co-wrote the blues standard, "Sitting on Top of the World".[1] Walter Vinson is variously erroneously known as Walter Vincson and Walter Vincent, and sometimes recorded as Walter Jacobs, thus using his mother's maiden name.

Vinson was born in Bolton, Mississippi, and grew up performing music in his locality. He rarely performed in his whole life on his own, most regularly being part of a duet, trio or group.[1]

He worked alongside Son Spand, Rubin Lacey and Charlie McCoy in the early to mid-1920s, before teaming up in 1928 with Lonnie Chatmon. They formed the Mississippi Sheiks.[1] The Sheiks and related groups under other names, such as Mississippi Mud Steppers, the Mississippi Hot Footers and Blacksnakes, recorded about a hundred sides in the first half of the 1930s, among them original compositions (probably by Vinson) such as "The World is Going Wrong" and "I've Got Blood in My Eyes For You" (1931) - both recorded by Bob Dylan - or the topical "Sales Tax" (1934).[2] Vinson claimed to have composed "Sitting on Top of the World" one morning, after playing at a white dance in Greenwood, Mississippi.[3]

After the Sheiks' split up in 1933, Vinson moved around the United States, recording with a variety of musicians, including Leroy Carter and Mary Butler.[1][4] He moved from Jackson, Mississippi to New Orleans and ultimately to Chicago, although by the mid-1940s his appearances in blues clubs had dwindled away. A lengthy break from music saw his re-appearance in 1960. He performed at music festivals and recorded further tracks over the next decade, before the onset of hardening of the arteries curtailed his public appearances.[1] Ill health forced his move into a Chicago nursing home in 1972.[5]

Vinson died in Chicago in 1975 at the age of 74.[1] He was interred at the Holy Sepulcher Cemetery in Hillside, Illinois in an unmarked grave.

In 2009, a concert held by executive producer, Steve Salter, of the nonprofit organization Killer Blues raised monies to place a headstone on Vinson's grave. The event was a success, and a stone was placed in October, 2009. The concert was held at the Howmet Playhouse Theater in Whitehall, Michigan. The concert featured blues musicians Thomas Esparza and Lonnie Blonde.

This article uses material from the article Walter Vinson from the free encyclopedia Wikipedia and it is licensed under the GNU Free Documentation License.