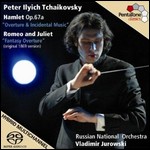 Jurowski began his musical studies at the Moscow Conservatory. In 1990, he moved with his family, including his brother Dmitri (conductor) and his sister Maria (pianist) to Germany, where he completed his education at the music schools at the Hochschule für Musik Carl Maria von Weber Dresden and the Hochschule für Musik Hanns Eisler. He studied conducting with Rolf Reuter and vocal coaching with Semion Skigin.[1] He participated in a conducting master class with Sir Colin Davis on Sibelius' Symphony No. 7 in 1991.[2][3]

Jurowski first appeared on the international scene in 1995 at the Wexford Festival, where he conducted Nikolai Rimsky-Korsakov's opera May Night, and he returned the following year for Giacomo Meyerbeer's L'étoile du nord, which was recorded by Naxos Records. In April 1996, he made his debut at the Royal Opera House, Covent Garden, conducting Nabucco.[4]

In the 1996/1997 season, Jurowski joined the ensemble of the Komische Oper Berlin, as an assistant to Yakov Kreizberg and second Kapellmeister.[5] He received the title first Kapellmeister a year later, and continued to work there full-time until 2001. He was the principal guest conductor of the Teatro Comunale di Bologna between 2000 and 2003.

In August 2000, Jurowski was named the Music Director of the Glyndebourne Festival Opera, and he took on the post in January 2001.[6] His conducting debut with the London Philharmonic Orchestra (LPO) was in December 2001.[7] In 2003, he was appointed the LPO's Principal Guest Conductor.[8] Jurowski was reported to have been offered the music directorship of Welsh National Opera upon the 2004 departure of Carlo Rizzi, but he declined the position.[9] His tenure with Glyndebourne was highly acclaimed, and Jurowski has spoken of the favourable working conditions at Glyndebourne.[10] Jurowski concluded his Glyndebourne tenure after the 2013 season.[11][12]

In May 2006, Jurowski was announced as the 11th Principal Conductor of the LPO, effective with the 2007/2008 season, with an initial contract of 5 years.[13][14] Several CD recordings of Jurowski conducting the LPO have been released.[15] In April 2007, Jurowski was one of eight conductors of British orchestras to endorse the 10-year classical music outreach manifesto, "Building on Excellence: Orchestras for the 21st Century", to increase the presence of classical music in the UK, including giving free entry to all British schoolchildren to a classical music concert.[16] In May 2007, Jurowski received the 2007 Royal Philharmonic Society Music Award for Conductor of the Year. In May 2010, the LPO announced the extension of his principal conductorship through the 2014–15 season.[17][18] In September 2014, the LPO announced the further extension of his contract as principal conductor through 2018.[19] Jurowski is also a Principal Artist of the Orchestra of the Age of Enlightenment.

Outside the UK, Jurowski is also a member of the Russian National Orchestra Conductor Collegium.[8] With the Russian National Orchestra, Jurowski recorded four discs for Pentatone: works by Tchaikovsky, Prokofiev and Shostakovich. In October 2011, the State Academic Symphony Orchestra of the Russian Federation announced the appointment of Jurowski as its principal conductor, with immediate effect, for an initial contract of 3 years.[20] In September 2015, the Berlin Radio Symphony Orchestra announced the appointment of Jurowski as its next chief conductor,[21] effective with the 2017–18 season.[22][23]

In the USA, Jurowski first conducted at the Metropolitan Opera in December 1999.[24] He made an acclaimed conducting debut with the Philadelphia Orchestra in October 2005.[25] He returned in February 2007 to Philadelphia for a second guest conducting engagement which also received critical praise.[26] Jurowski has since become a regular guest conductor with the Philadelphia Orchestra, including appearances in March 2009,[27] October 2009, March 2010,[28] November 2011, February 2014, and October 2014.[29]

After earlier releases (various Russian works, and Schnittke’s Symphony No. 3) with PENTATONE, Jurowski signed a long-term, multi-album cooperation with this record label in 2017. Under this cooperation he will record a broad range of repertoire. This will include the complete cycle of Prokofiev symphonies, performed together with the State Academic Symphony Orchestra of Russia ''Evgeny Svetlanov”.[30] To celebrate his appointment as Chief Conductor of the Berlin Radio Symphony Orchestra he conducted the orchestra on two PENTATONE releases: Mahler’s Totenfeier with Strauss’ Also sprach Zarathustra and Britten and Hindemith violin concertos with Arabella Steinbacher as soloist.

Jurowski and his wife Patricia have two children, Martha and Yuri. The family resides in Berlin.[3][31]

This article uses material from the article Vladimir Jurowski from the free encyclopedia Wikipedia and it is licensed under the GNU Free Documentation License.

Christoph Förster Hornkonzert Es-Dur
Update Required To play the media you will need to either update your browser to a recent version or update your Flash plugin.