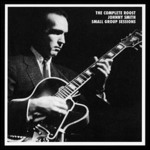 During the Great Depression, Smith's family moved from Birmingham, Alabama, through several cities, ending up in Portland, Maine.[1]

Smith taught himself to play guitar in pawnshops, which let him play in exchange for keeping the guitars in tune. At thirteen years of age he was teaching others to play the guitar. One of Smith's students bought a new guitar and gave him his old guitar, which became the first guitar Smith owned.[1]

Smith joined Uncle Lem and the Mountain Boys, a local hillbilly band that travelled around Maine, performing at dances, fairs, and similar venues. Smith earned four dollars a night. He dropped out of high school to accommodate this enterprise.[1]

Having become increasingly interested in the jazz bands that he heard on the radio, Smith gradually moved away from country music towards playing more jazz. He left The Mountain Boys when he was eighteen years old to join a variety trio called the Airport Boys.[2]:10

Having learned to fly from pilots he befriended, Smith enlisted in the United States Army Air Corps in the hopes of becoming a military pilot.[1] He was invalidated from the flight programme because of imperfect vision in his left eye.[1][3] Given a choice between joining the military band and being sent to mechanic's school, Smith opted to join the military band. Smith claims that they gave him a cornet, an Arban's instructional book, and two weeks to meet the standard, which included being able to read music.[1][3] Determined not to go to mechanic's school, Smith spent the two weeks practicing the cornet in the latrine, as recommended by the bandleader, and passed the examination.[1][3]

An extremely diverse musician, Johnny Smith was equally at home playing in the famous Birdland jazz club or sight-reading scores in the orchestral pit of the New York Philharmonic. From Schoenberg to Gershwin to originals, Smith was one of the most versatile guitarists of the 1950s.

As a staff studio guitarist and arranger for NBC from 1946 to 1951, and on a freelance basis thereafter until 1958, he played in a variety of settings from solo to full orchestra and had his own trio, The Playboys, with Mort Lindsey and Arlo Hults.[2]:26

Smith's playing is characterized by closed-position chord voicings and rapidly ascending lines (reminiscent of Django Reinhardt, but more diatonic than chromatically-based). From those famous 1952 sides and into the 1960s he recorded for the Roost label, on whose releases his reputation mainly rests. Mosaic Records has issued the majority of them in an 8-CD set.[4]

His most critically acclaimed record was Moonlight in Vermont (one of Down Beat magazine's top two jazz records for 1952, featuring saxophonist Stan Getz).[2]:43 Initially released as a track on the 10-inch Lp "Jazz at NBC" (Roost 410), "Moonlight in Vermont" was later made the title track of a 1956 12-inch Lp.

His most famous musical composition is the tune "Walk Don't Run", written for a 1954[5] recording session as counter-melody to the chord changes of "Softly, as in a Morning Sunrise". Guitarist Chet Atkins covered the tune, recording a neo-classical rendition of the song on the electric guitar for his Hi Fi in Focus album which preceded the Ventures' hit by three years. He played his arrangement fingerstyle, including the bass notes A, G, F, and E which later became the basis for the Ventures' arrangement. The musicians who became The Ventures heard the Atkins version, simplified it, sped it up, and recorded it in 1960. The Ventures' version went to No. 2 on the Billboard Top 100 for a week in September 1960.

In 1957, Smith's wife died in childbirth, along with his second child. He sent his young daughter to Colorado Springs, Colorado to be cared for temporarily by his mother, and the following year he left his busy performing career in New York City to join his daughter in Colorado. There, Smith ran a musical instruments store, taught music, and raised his daughter while continuing to record albums for the Royal Roost and Verve labels into the 1960s.[6] He told The Colorado Springs Independent in 2001 (as quoted in his New York Times obituary) "In the end, everything came down to the fact that I loved my daughter too much to let my career put her at risk. But there were other factors, too. I loved New York musically, but I hated living there." The Times noted that "Smith continued to record, and sometimes performed in Colorado nightclubs, but declined almost all invitations to tour. One exception was for Bing Crosby, whom he accompanied on a tour of England in 1977 that ended shortly before Mr. Crosby's death."[6]

Smith died of complications from a fall at his home in Colorado Springs, Colorado, at the age of 90.[7][6]

In 2018, Tzadik Records released The Maid With The Flaxen Hair: A Tribute To Johnny Smith by guitarists Mary Halvorson and Bill Frisell. The album features songs written by, or associated with, Johnny Smith.[8]

Guild, Gibson, and Heritage have all made guitar models designed and endorsed by Johnny Smith. In each case, the guitar was designed wholly or in part by Smith. Each design was a full-bodied archtop guitar with a top carved from solid spruce and a back and sides made of solid maple. All the on-board electronics for each guitar, from the small pickup in the neck position through the volume knob to the output jack, were mounted on the pickguard.

Smith claims to have learned about guitar design by observing master luthier John D'Angelico, who was his friend and guitar supplier when he lived in New York.[3]

In 1955, after discussions with Alfred Dronge, chairman and founder of Guild Guitar Company, Smith designed a guitar and sent the drawings and specifications to Dronge. The Guild designers modified it (to Smith's dissatisfaction), and manufactured the resulting guitar as the Guild Johnny Smith Award.[3][9]:143

In 1961, Ted McCarty, then president of Gibson, went to meet the retired Smith at his home in Colorado Springs. McCarty spent several days with Smith, during which time Smith designed the guitar he wanted built. The design was accepted by Gibson with a few minor cosmetic changes which were acceptable to Smith.[3] Gibson began production of the resulting Gibson Johnny Smith model that year.[9]:135 Guild continued to produce their Johnny Smith guitar under the model name Guild Artist Award.[9]:143

When Gibson moved its manufacturing facilities from Kalamazoo, Michigan to Nashville, Tennessee, several of their managers and artisans chose to stay behind. Many of these ex-employees formed Heritage Guitars and bought the old Kalamazoo factory from Gibson. Given a choice between Gibson and Heritage building the guitar that bore his name, Smith chose to stay with the old artisans at the old location under new ownership. The Heritage Johnny Smith model was introduced in 1989.[10] Like Guild before them, Gibson continued to manufacture their version of the Johnny Smith design with a new name: the Gibson LeGrand.[11]

William Schultz, chairman of Fender Musical Instruments Corporation, of which Guild Guitars was a subsidiary, asked Smith if he would be willing to return his endorsement to the Guild Artist Award. Familiar with Schultz's management, and knowing that the construction would be supervised by master luthier Bob Benedetto, Smith agreed.[3] The Guild Johnny Smith Award by Benedetto was available through Guild dealers until early 2006 when Benedetto left Fender.[12] Unlike Guild and Gibson, Heritage Guitars discontinued manufacture of their Smith-designed guitar after Smith withdrew his endorsement.

This article uses material from the article Johnny Smith from the free encyclopedia Wikipedia and it is licensed under the GNU Free Documentation License.