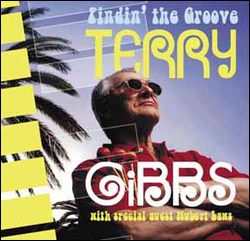 In the late 1950s, he appeared on NBC's The Steve Allen Show, on which he regularly played lively vibraphone duets with the entertainer and composer. In 1997, he appeared on Steve Allen's 75th Birthday Celebration on PBS. Gibbs was also the bandleader on the short-lived That Regis Philbin Show. As an instrumentalist, together with his big band, the Dream Band, Gibbs has won prestigious polls, such as those of Downbeat and Metronome.

When Gibbs moved from New York to California in 1958 he began planning for his next big band album. In early 1959 he booked extended residencies at two Los Angeles night clubs, the Seville and the Sundown for what became known as the Dream Band. [3]

The band usually played on a Sunday, Monday or Tuesday night when the cream of Hollywood jazz and studio musicians would be available. The core band always remained stable with Mel Lewis holding down the drum chair.

New arrangements were commissioned from Bill Holman, Marty Paich, Med Flory, Manny Albam and Al Cohn, among others, to feature Gibbs’ vibes in front of the band.

Four additional albums of unissued live material recorded in 1959 have been released since 1986.

This article uses material from the article Terry Gibbs from the free encyclopedia Wikipedia and it is licensed under the GNU Free Documentation License.