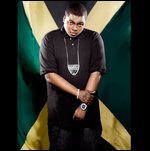 Kisean Anderson (born February 3, 1990), better known by his stage name Sean Kingston, is a Jamaican-American rapper, singer and songwriter. He pursued a music career and debuted in 2007 with the album Sean Kingston.

Kingston was born on February 3, 1990, in Miami, Florida, and moved to Kingston, Jamaica, when he was six.[1] He attended high school in Ocho Rios.[2] His grandfather was the noted Jamaican reggae producer Lawrence Lindo,[3] who worked under the stage name Jack Ruby.[4][1] Afterwards, Kingston spent three weeks in jail for burglary, and he lived in a car while his mother was incarcerated for identity theft.[1][5]

Sean Kingston was discovered on Myspace by Tommy Rotem at Beluga Heights, and signed to the label in a partnership deal with Sony.[6] In an interview with HitQuarters label head and producer J.R. Rotem described this process with regards to Kingston:

"Sean Kingston was a rapper when we found him and it was a development process to get him more melodic. At Beluga we essentially refine the talent so that it's more of a marketable product."[6]

In a venture between Epic Records and Koch Records, Kingston recorded and released the single "Beautiful Girls" in May 2007.[7] The single, based on the bass line and lyrical "association" of the 1961 hit "Stand by Me" by Ben E. King, reached number one on the US Billboard Hot 100 for three weeks and topped the UK Singles Chart along with many other international charts. Similarly, the song "Me Love" samples the main hook out Led Zeppelin's "D'yer Mak'er", from their 1973 album Houses of the Holy. The song also debuted at number one in Australia, where it knocked off Fergie's "Big Girls Don't Cry", which had been at number one for nine weeks. The song stayed on the Canadian Hot 100 number one spot for over six weeks before getting knocked down to third place by the Plain White T's. "Beautiful Girls" remained at number one in Canada longer than any other song in 2007. In 2007, Kingston was the opening act for Gwen Stefani's The Sweet Escape Tour and for select dates on Beyoncé's The Beyoncé Experience Tour. In 2008, he was one of the opening acts for the Australian leg of Kelly Clarkson's My December Tour.[8] Since Sean is a Jamaican singer, he got his stage name "Kingston" from the capital of Jamaica called Kingston, Jamaica.

Kingston co-wrote Jason Derülo's "Whatcha Say". He also found the R&B-reggae singer Iyaz on MySpace and signed him to his record label.[10] He also recorded the track "Miss Everything" for the UK girl-group Sugababes studio album Sweet 7 which was released March 15, 2010, in the UK. Kingston and DJ Khaled are being featured on Bow Wow's new single "For My Hood", from the upcoming movie, The Lottery Ticket.[11]

2010present: Back 2 Life, King Of Kingz "Lee Strike" and other projects

According to Sean Kingston, he is already working on his next album. The lead single was confirmed to be "Dumb Love". The song's chorus samples 1957's, Come Go With Me by the Del Vikings. The song is also featured in an episode of The Suite Life on Deck which Kingston guest starred on. The album will also feature T-Pain, Nicki Minaj, Kanye West, Flo Rida, Soulja Boy, Wyclef Jean, Cher Lloyd, Akon and Dr. Dre.[12][13] The first single from the album is "Eenie Meenie" featuring Justin Bieber, released on March 23, 2010,[14] which is also included on Bieber's My World 2.0 album. This collaboration with the young star has been the source of much disapproval from the rap community.(disputed) The second single from the album is "Letting Go (Dutty Love)", which features a verse from Nicki Minaj. It was released on iTunes August 3, while the third is "Dumb Love" and was released on iTunes September 8. Sean Kingston's new song "She Moves" samples Irena Cara's "What a Feeling" from the film Flashdance. This has not been release as a single. A fourth single "Party All Night (Sleep All Day)" was released on December 21, 2010. The song leaked online in December 2010. The music video has already been shot. The video was released on December 23, 2010. Sean said this would be the song of the new year.

Kingston represented the continent of America to sing the Official Theme Song of the Singapore 2010 Youth Olympic Games, "Everyone". He collaborated with four other international artists representing their continent, South African Jody Williams representing Africa, Singaporean Tabitha Nauser (Asia), Briton Steve Appleton (Europe), and Australian Jessica Mauboy representing Oceania.[15] However, Kingston was unable to attend the Singapore Youth Olympics 2010 opening ceremony due to passport mix ups.[16] Sean was invited to be featured with Cash Money Records/former So So Def member Bow Wow on his single "For My Hood". He performed it with him and DJ Khaled on BET's television program 106 & Park the day after release.

Kingston will release a mixtape with pop star Justin Bieber, called Our World. It will feature about 1214 songs and includes their versions of songs like "Pretty Boy Swag" and "Billionaire". The mixtape is finished and Kingston showed his fans a preview on uStream on August 19, 2010. The release date is yet to be confirmed. Kingston also went on to perform on first leg of Bieber's tour. On April 25, 2011, Kingston performed at Cross Roads Hotel in front of 2,000 people in Lilongwe, Malawi. Kingston was recently in Zimbabwe performing there and is scheduled to perform in Ghana in June 2011. He performed a street concert on April 29, 2011, at Utah State University.[17]

Kingston has announced that his new album will be called Back 2 Life.[18] He also said in an interview with MTV that he would be completely re-doing the album and that the previous singles will not be on it. According to Sean's Twitter the first single off the album will be released the first week in May 2012. Sean linked up with T.I. on set of the video for "Back 2 Life", the street single off his upcoming album of the same name. The two shot the video in Los Angeles with comedian Mike Epps. In November 2012, Kingston performed in the Dubai Caribbean Carnival at Downtown Dubai with Jason Derülo and Bow Wow. Kingston is expected to play in Philadelphia at the University of the Sciences on April 5, 2013, and at the University of New England on April 27, 2013. He is a big fan of K-Tina. Kingston is also confirmed to perform at "Dayton 2 Daytona" at the University of Dayton. On April 13, 2013 iTunes put up the preorder of Back 2 Life. Its cover art and track listing as well as a release date of September 10, 2013 [19]

Kingston filmed a public service announcement with Do Something to encourage teens to become active in their communities by forming a Do Something club.[20] In 2010, he appeared with one of his dogs in an ad for PETA, encouraging people not to chain their dogs outside.[21]

On May 29, 2011, Kingston was involved in a jet skiing accident in Miami Beach, Florida. He was with a female passenger, who was severely injured when their jet ski struck the bridge connecting Palm Island with the MacArthur Causeway at approximately 6 pm. Kingston was taken to Jackson Memorial Hospital in Miami, where he was placed on the standard medical/surgical care unit, but had to be transferred to the intensive care unit.[22][23][24] He suffered a fractured wrist and broken jaw along with water in the lungs, but he later made a full recovery.

This article uses material from the article Sean Kingston from the free encyclopedia Wikipedia and it is licensed under the GNU Free Documentation License.