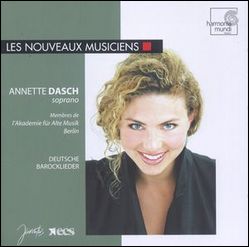 Annette Dasch (born 24 March 1976 in Berlin) is a German soprano. She performs in operas and concerts.

She made her debut at the Bavarian State Opera as the Gänsemagd (Goose girl) in Humperdinck's Königskinder, at La Scala as Elvira in Mozart's Don Giovanni, at the Salzburg Festival 2006 as Aminta in his Il re pastore, staged and conducted by Thomas Hengelbrock,[1] and at the Opéra National de Paris as Antonia in Offenbach's Contes d'Hoffmann.[2] Her performance of Schumann's Genoveva at the Hessisches Staatstheater Wiesbaden under Marc Piollet was recorded live in 2006.[3] In 2007 she sang Elvira at the Berlin State Opera under Daniel Barenboim.[4] She appeared in Salzburg in 2007 as Haydn's Armida, staged by Christof Loy,[5] and in 2008 as Donna Anna in Don Giovanni.[6][7] She sang the role of Electra in Mozart's Idomeneo, staged by Dieter Dorn and conducted by Kent Nagano, in the reopening in June 2008 of the Cuvilliés Theatre where the opera had been first performed in 1781.[8][9] Idomeneo was performed by John Mark Ainsley and Ilia by Juliane Banse. Her debut at the Metropolitan Opera in 2009 was the Countess in Mozart's Le nozze di Figaro, conducted by Fabio Luisi.[10] Her debut at the Bayreuther Festspiele was Elsa in Wagner's Lohengrin, staged by Hans Neuenfels and conducted by Andris Nelsons, in the opening night 25 July 2010.[6]

On the concert stage she appeared at the Maggio Musicale Fiorentino in Mendelssohn's Elijah with Seiji Ozawa. She sang in Schumann's Das Paradies und die Peri the Vienna Philharmonic conducted by Nikolaus Harnoncourt.[2] With the Gächinger Kantorei and the New York Philharmonic under Helmuth Rilling she appeared in Avery Fisher Hall in Handel's Messiah in 2009.[11][12]

Annette Dasch is on the jury of the International Song Competition "Das Lied" chaired by Thomas Quasthoff.[13] Composer Richard Beaudoin has dedicated two works to her.[14]

She has a regular show called "Annette's Dasch-Salon" in Berlin, playing with the term "Waschsalon" (laundromat).[15]

This article uses material from the article Annette Dasch from the free encyclopedia Wikipedia and it is licensed under the GNU Free Documentation License.

Georg Friedrich Händel Allemande aus dem Concerto grosso c-moll op. 6 Nr.8
Update Required To play the media you will need to either update your browser to a recent version or update your Flash plugin.