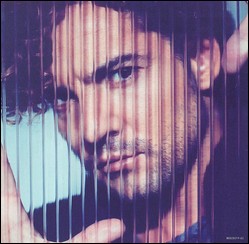 David Bisbal Ferre (born in Almería, Spain on June 5, 1979) is a Spanish singer, songwriter, and actor. He gained his initial fame as a runner-up on the interactive reality television show Operación Triunfo.

He has since released five studio albums, all of which topped the Spanish Albums Chart, in addition to recording a number of live albums. He has toured throughout Europe and Latin America and is now considered to be a crossover international artist.

As of 2017, David Bisbal has sold more than Six million records in Spain and America, getting 48 platinum albums, 17 gold and two diamond. Corazón Latino and Bulería treasure each one IFPI Platinum Award, official certification for selling over one million copies across Europe.

David Bisbal was born on June 5, 1979 in Almería, Spain. His parents are José Bisbal, a professional boxer and part of a trio of flamenco music, and Maria Ferre Montoya. He is the youngest of three siblings, a brother named José María and a sister named María del Mar. As a child, Bisbal showed a talent for performing, but was always very shy about doing so in public.

Bisbal attended the secondary school IES Al-Andalus in Almeria, but dropped out of in his second to last year at around age 15. After dropping out, his father took him to work for Ranger in the local nursery in Almeria, which was his first known job. A few years later he met the producer of the Orchestra Expressions, who discovered David singing. After listening to and discovering his vocal quality, the producer offered him employment as the main voice of the orchestra.

David began working in Orchestra Expressions, a popular band in Almeria. He gradually began to develop as a singer, and to discover his passion for music. Having been in the orchestra, David went to the auditions for Pop Idol, in Barcelona, Spain. In 2001, he was one of 16 contestants from the first Spanish edition of 'Idol' contest designed to choose the representative for the festival 'Eurovision' of that year. Finally he came in second place to Rosa Lopez. Bisbal also performed at Eurovision with Rosa Lopez, David Bustamante, Chenoa, Gisela and Geno, in the chorus.

In October 2001 he auditioned for the first ever edition of Operación Triunfo (Spanish version of Star Academy) where he was accepted and was one of the 16 contestants. He reached the final, where he was the runner-up behind Rosa López. The top three contestants qualified for a secondary phase of the contest, where the prize was the chance of representing Spain in the Eurovision Song Contest. He came second in the Eurovision phase with the song "Corazón Latino", losing to Rosa López. She went on to sing "Europe's Living a Celebration" for Spain in the Eurovision Song Contest 2002 competition in Tallinn, and Bisbal accompanied her as a backing vocalist.

Bisbal signed a contract with Vale Music Record label and released his first album recorded in Miami under the title Corazón Latino with Kike Santander. The album went platinum 7 times platinum by summer 2002, after having topped the Spanish charts. The first single from the album, called Ave Maria, had a phenomenal success. After winning the Latin Grammys, the album went platinum (over 1 million sales).

On February 10, 2004, he released his second album entitled Bulería, again produced by his friend Kike Santander. It found similar success in Spain and throughout Latin America, hitting diamond level with more than 1 million albums sold in Spain alone, becoming the best Spanish seller of 2004.

In March 2005, he also released a DVD Todo Por Ustedes that contained live registrations of some of his concerts in the United States, Latin America and Spain.

Premonición became the third studio album by David Bisbal released on October 3, 2006. By the end of its first week of release, it had achieved enough sales to be certified as 5 times platinum with sales over 400,000 copies in Spain alone.

After achieving fame as Operación Triunfo finalist, he signed a contract with label Vale Music, offering him the opportunity to record his first solo debut album. The album, entitled Corazón Latino, was released in Summer 2002, recorded in Miami and produced by Kike Santander. The album reached number one in its debut week selling over 600,000 copies, breaking sales records; the album stayed for seven consecutive weeks at number one on the Spanish Albums Chart. With more than 900,000 copies sold in Spain, Bisbal was launched to the rest of Spanish-speaking countries; his debut album would be released on October 15. In January 2003, Bisbal received an Amigo award in Madrid's Palacio de Cristal de la Arganzuela. On October 31 he began his first tour in Latin America, in Argentina; he visited 12 countries and performed 17 live concerts. In November a special issue of Corazón Latino' was released in Mexico.

The first single from Bisbal's second album, "Bulería", premiered on December 15, 2003. It reached number 1 on the charts and radio stations of both Spain and Latin America. On 11 February, the eponymous album was released. The album debuted on the charts in Spain where more than 300,000 copies were sold in a week. It also reached gold certification in Colombia and Venezuela in two weeks.

He first set foot in Germany in November in order to promote his duet with singer Joana Zimmer. The duet's theme was "Let's make history". Several days after presenting the video with Joana Zimmer, David make an appearance at the Tribute to Rocío Jurado Gala in order to perform.

The first single of his third studio album Premonición, "Quién me iba a decir" was released in August 2006. The album was released on October 3, 2006. It sold more than 900,000 copies.

On October 24 he performed at the seat of European Parliament in Strasbourg where he gave an exclusive concert, in which he performed the songs from his album, to representatives of 25 member countries. The album stayed for a month at number one on the Spanish chart. The singer won an Ondas Award in a ceremony held at the Barcelona Teatre Musical, and a Micrófono de Oro award. In January 2007, the second single from the album "Silencio" stayed for eight weeks at number one in Los 40 Principales.

In 2008, Bisbal performed a duet with Rihanna, "Hate That I Love You", which was included in the re-issue of Good Girl Gone Bad.

His fourth studio album Sin Mirar Atrás was released on 20 October 2009 in Spain, Latin America and the United States. The first single from the album was "Esclavo de tus Besos", under the production of Mexican-born Armando Ávila. Its world premiere was on August 24 and the video came out on September 7. It was one of the most successful singles of the Spanish singer throughout his career, reaching number 1 on sales and radio charts in Spain, Latin America and the United States. On January 9, 2010 Promusicae announced that "Esclavo de Tus Besos" had earned a double platinum certification for its more than 80,000 copies sold in Spain, and it also earned a platinum certification in Argentina for more than 20,000 copies sold. The second single from the album was "Mi Princesa". The song "24 Horas" made by Espinoza Paz Mexico, the third single in the U.S. and Latin America, was presented at the 2010 Billboard Awards, while in Spain the single was "Sin Mirar Atrás", a song that gives title to the album. Bisbal also won his first Latin Grammy in 2009. On November 14, 2010 he was presented the Gold Record for the sales of the album in USA and Puerto Rico.

David Bisbal sang the theme song for the soap opera "Herederos de una venganza". It is one of the highest rated telenovelas in Argentina, which starred Romina Gaetani, Luciano Castro and Federico Amador, where all romantic moments are set to music by the song sung by David Bisbal. The authors of this issue are Bisbal himself, Sebastian Bazan, and Karen Oliver.

On November 5, 2011 he released his first acoustic DVD entitled "Una noche en el Teatro Real," recorded in the musical temple four days earlier. In its first week on sale, he got a record to beat for the first time a DVD sales of a CD in seven days getting to sell more than 50,000 copies obtaining double platinum. On January 18, Bisbal won the triple platinum surpassing the figure of 75,000 copies sold. In 2012 he got platinum in Spain for his CD live Royal Albert Hall.

During the tour of "Una noche en el Teatro Real," Bisbal played in some of the most iconic theaters and auditoriums in Spain, North America, Latin America, the Southern Cone and major European capitals. He played in a total of 128 concerts in such unique venues as the Royal Albert Hall in London, Carnegie Hall in New York, an Luna Park in Buenos Aires. Writing about Bisbal's Albert Hall concert in September 2012, Boris Izaguirre described him as "the voice of Spanish emigrants" and "The Julio Iglesias of the lost generation", noting that many Spaniards in their twenties who had been forced to emigrate by the financial crisis had grown up during Bisbal's rise to fame during the previous decade's economic boom.[2] On November 15, 2012, in Las Vegas, David Bisbal won his third Latin Grammy, this time in the category "Best Traditional Pop Album".

Bisbal's career took a turn towards its beginnings when he joined the Spanish reality talent show La Voz as a judge, acting as coach to eventual winner Rafa Blas in the first series. In addition he was a judge on La Voz... México on the third series of the show. However, in January 2014 after appearing on two seasons of the Spanish show and one of the Mexican edition, Bisbal announced he would leave these roles due to a heavy schedule of live and promotional work for his new album Tú y Yo.[3][4] In mid-2016, he was a mentor on the show La Apuesta in which he was the winner next to his contestant Héctor Osobampo.

Internationally, Bisbal enjoys popularity in a great number of countries.

All discography information was obtained from the David Bisbal Official Website.

"—" denotes the album failed to chart or not released

This article uses material from the article David Bisbal from the free encyclopedia Wikipedia and it is licensed under the GNU Free Documentation License.