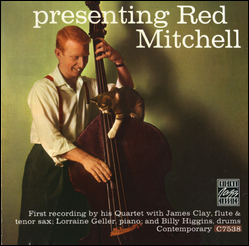 Mitchell was raised in New Jersey by a father who was an engineer and loved music, and a mother who loved poetry. His first instruments were piano, alto saxophone, and clarinet. Although Cornell University awarded him an engineering scholarship, by 1947 he was in the US Army playing bass. The next year he was in a jazz trio in New York City.

Saxophonist Harold Land and Mitchell founded and co-led a quintet in the early 1960s.

Mitchell moved to Stockholm in 1968.[1] He won Sweden's Grammis Award in 1986 and again in 1991 for his recorded performances as a pianist, bassist, and vocalist, and for his compositions and poetic song lyrics.

A collection of his poetry was published posthumously. His widow is preparing a biography.

Mitchell used standard tuning during the 1950s and for the first half of the 1960s, and produced sound similar to his professional jazz bass peers.[3] However, "in 1966 he switched to cello tuning on his bass (C-G-D-A, an octave below the cello, instead of the standard E-A-D-G). At the same time, he began adjusting the tone controls of his amplifier to create a soft, unfocused sound in the lowest notes and to emphasize the upper harmonics in higher notes. The result was an airy tone quality that sounded gentle, not muscular. This airy tone and his frequent habit of strumming the strings with his right thumb contributed greatly to his unusual style."[3]

With Bill Perkins and Richie Kamuca

This article uses material from the article Red Mitchell from the free encyclopedia Wikipedia and it is licensed under the GNU Free Documentation License.