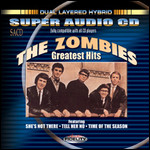 Although born in Barnet, Hertfordshire, he was brought up in Markyate where his parents owned a village shop. He replaced the band's initial bassist, Paul Arnold.

White was one of the band's two main songwriters, alongside Rod Argent, and penned two tracks on their USA debut LP, The Zombies released in January 1965. On the UK debut release, Begin Here, he had four tracks, one co-written with Argent. For the Zombies' performances in the 1965 film Bunny Lake Is Missing White wrote "Nothing's Changed" and "Remember You". He also wrote seven of the twelve songs on the group's final album and generally acknowledged masterpiece, Odessey and Oracle, with Argent contributing the remainder. White, though not the band's main vocalist, contributed lead vocals to "Butcher's Tale (Western Front 1914)" and sang a verse of "Brief Candles".

Following the demise of The Zombies, White contributed songwriting and production work to Colin Blunstone's solo career and Rod Argent's new band, Argent. In a later role as a record company A&R man, he was instrumental in discovering the band Dire Straits. In 2007, as part of the group White Circle, he co-wrote, co-produced and performed on the album The Key.[2]

Also in 2007/2008, White co-produced and played on the album Featherhead for his youngest son, the London based singer/songwriter JJ White.[3]

In March 2008, White began a series of live performances with the other three surviving members of The Zombies, including the first complete performances of the album Odessey and Oracle, in celebration of the 40th anniversary of its release.[4]

White currently resides in London. He is not the Chris White who had a top 40 UK hit in 1976 with the song "Spanish Wine".

This article uses material from the article Chris White (musician) from the free encyclopedia Wikipedia and it is licensed under the GNU Free Documentation License.