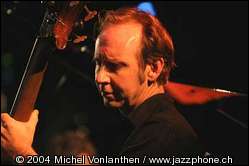 Drew Gress (born November 20, 1959) is an American jazz double-bassist and composer born in Trenton, New Jersey, raised in the Philadelphia area, and currently based in New York City.

Gress became interested in jazz and the double bass while a teenager, joining the Pennsbury Concert Jazz Band, a nationally-prominent high school jazz ensemble, in 1975, spending two years as bassist and arranger for the group. His interest in composing original material for large ensembles, such as those of Johnny Richards, Billy May, and Pat Williams, led him to Baltimores Towson State University in 1977, where he studied composition and counterpoint with Hank Levy, known for his work with Don Ellis and Stan Kenton. While at Towson, Gress established a playing relationship with saxophonist Ellery Eskelin, with whom he cofounded Joint Venture with Paul Smoker and Phil Haynes. They released three albums on Enja Records between 1987 and 1994.

During the 1980s in the Baltimore/Washington DC area, he played with Sonny Stitt, Clifford Jordan, Albert Dailey, Mose Allison, Zoot Sims, Cab Calloway, Buddy Hackett, Phyllis Diller, and pianist Marc Copland, with whom he still plays today. He also served on the faculties of the Peabody Conservatory, Towson State University, and the Baltimore School for the Arts. He formed a quartet, Tekke, in 1989 with David Kane, Glenn Cashman, and Michael Smith.

In 1997, he cofounded the cooperative improvising trio Paraphrase with saxophonist/composer Tim Berne and drummer Tom Rainey. Together, they pursued a compositional approach to free improvisational practice. They recorded two live albums together and toured extensively until 2002.

In 1998, he released his first album as leader, Heyday, with his band Jagged Sky (featuring David Binney, Ben Monder, and Kenny Wollesen). 2001 saw the release of Spin & Drift with Uri Caine, Berne, and Rainey, in which he played pedal steel guitar for the first time.

Earlier in the 1990s, he served tenures as artist in residence at University of Colorado-Boulder and at Russia's St. Petersburg Conservatory.

Gress own ensembles have toured Europe four times since 2002, in addition to isolated festival appearances in Italy and Portugal. In 2004, the UKs BBC Radio and Londons Guardian selected his quartets live radio broadcast as Jazz Concert of the Year.

Composition awards include an NEA grant (1990), funding from Meet the Composer (2003), a Chamber Music America New Works Grant (2005), a CMA French-American Exchange Grant (2007), and an Encore Grant from that same organization (2008). He continues to compose for larger groups and has begun experimenting with virtual synthesizers.

This article uses material from the article Drew Gress from the free encyclopedia Wikipedia and it is licensed under the GNU Free Documentation License.