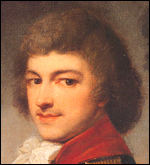 Ogiński was born in Guzów in Mazovia (west of Warsaw) in the Kingdom of Poland.[1] His father, Andrzej, was a Polish-Lithuanian nobleman from the Ogiński family and governor of Troki, in the Grand Duchy of Lithuania. His mother, Paulina Szembek (1740–1797), was the daughter of Polish magnate, Marek Szembek, whose ancestors were Austrian, and Jadwiga Rudnicka, who was of Lithuanian descent. His first introduction to music arose during a visit to relatives at Słonim where Michał Kazimierz Ogiński had a contemporary European theatre that hosted opera and ballet productions. Michał Kleofas received an Enlightenment gentleman's education. He studied music with Osip Kozlovsky and took violin lessons from Giovanni Battista Viotti and Pierre Baillot.[1]

Aged only 20, Ogiński was chosen as an envoy of the Polish–Lithuanian Commonwealth. He served as an adviser to King Stanisław August Poniatowski and supported him during the Great Sejm of 1788–1792.[9] In 1788 he received the Order of Saint Stanislaus[10] and in 1789 - the Order of the White Eagle, Poland's highest order. In 1790 he was dispatched as a diplomatic representative to the United Kingdom, where he met with Lord Mansfield who warned him about the danger posed by the tri-partite powers about to dismember the Kingdom of Poland.[11] After 1790, he was sent to The Hague as a diplomatic representative of Poland to the Netherlands and was Polish agent in Constantinople and Paris.[12][13][5] In 1793, he was nominated to the office of Vice-Treasurer of Lithuania.[5][9]

During the Kościuszko Uprising in 1794, Ogiński commanded his own unit.[14] After the insurrection was suppressed, he emigrated to Constantinople and later to France, where he sought support for the Polish-Lithuanian Commonwealth.[9] At that time he saw the creation of the Duchy of Warsaw by the Emperor as a stepping stone to the eventual full independence of the Commonwealth. He dedicated his only opera, Zelis et Valcour, to Napoleon.[15] In 1810, Ogiński withdrew from political activity in exile and, disappointed with Napoleon, returned to Vilnius.[5][16] Adam Jerzy Czartoryski introduced him to Tsar Alexander I, who made Ogiński a Russian Senator. Ogiński tried in vain to convince the Tsar to reconstitute the former Commonwealth. Disillusioned, he moved abroad in 1815. He died in Florence in 1833.[9]

As a composer, he is best known for his polonaise Farewell to My Homeland (Pożegnanie Ojczyzny), written in 1794 in the Zalesie region (then part of the Polish-Lithuanian Commonwealth, today in Belarus), on the occasion of his emigration after the suppression of the Kościuszko Uprising.[6][14][17] This piece, with its unreservedly melancholic melodies and fantasia-like passages, can be considered among the earliest examples of romantic music.

Ogiński admired French and Italian opera. He was a violinist, and played the clavichord and the balalaika. He began composing marches and military songs in the 1790s that gained popularity among the rebels of 1794. He composed some 20 polonaises, piano pieces, mazurkas, marches, romances and waltzes.[1]

Some of his other popular works and compositions include:

This article uses material from the article Michal Kleofas Oginski from the free encyclopedia Wikipedia and it is licensed under the GNU Free Documentation License.

Johann Nepomuk Hummel 2.Satz "La Seccatura" aus dem Klarinettenquartett Es-Dur
Update Required To play the media you will need to either update your browser to a recent version or update your Flash plugin.