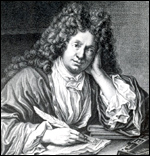 Michel Richard Delalande [de Lalande] (15 December 1657 - 18 June 1726) was a French Baroque composer and organist who was in the service of King Louis XIV. He was one of the most important composers of grands motets. He also wrote orchestral suites known as Simphonies pour les Soupers du Roy and ballets. His works foreshadowed the cantatas of JS Bach and the Water Music and oratorios of Handel.

Born in Paris, he was a contemporary of Jean-Baptiste Lully and François Couperin. Delalande taught music to the daughters of Louis XIV of France, and was director of the French chapel royal from 1714 until his death at Versailles in 1726.

Delalande was arguably the greatest composer of French grands motets, a type of sacred work that was more pleasing to Louis XIV because of its pomp and grandeur, written for soloists, choir and comparatively large orchestra. According to tradition, Louis XIV organized a contest between composers, giving them the same sacred text and time to compose the musical setting. He alone was the judge. Delalande was one of four winners assigned to compose sacred music for each quarter of the year (the other composers being Coupillet, Collasse and Minoret). Delalande's was the most important quarter of the year because of the Christmas holiday. Later he had full responsibility for the church music for the complete year. At his death, since he left no mass of his own, the 1656 requiem of the Dukes of Lorraine by Charles d'Helfer was sung.

Also, at least four collections of his works exist, each displaying different looks at composer's work as viewed by the people who assembled each collection.

Scholarship of Delalande's work was for many years hindered because of inconsistencies in the spelling of his last name: de Lalande, Lalande, la Lande, de la Lande, and others. The family wrote the name as 'Delalande'. Finally, in 2006 the definitive "Thematic Catalogue of the Works of Michel-Richard de Lalande (1657-1726)" by noted British musicologist Lionel Sawkins came out which runs to 752 pages containing over 3,000 music examples and details of performing requirements and of all source materials, as well as with comprehensive indexes and thematic locators.

Instrumental Lalande was an expert organist and harpsichordist, and yet has left not a single note of keyboard music.[1]

This article uses material from the article Michel Richard Delalande from the free encyclopedia Wikipedia and it is licensed under the GNU Free Documentation License.