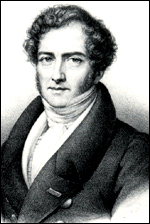 Born during the Ancien Régime in Rouen, Adrien Boieldieu received his musical education first from the choirmaster and then from the organist of the local cathedral. During the Reign of Terror, Rouen was one of the few towns to maintain a significant musical life and in 1793 a series of concerts was organised featuring the celebrated violinist Pierre Rode and the tenor Pierre-Jean Garat. It was during this time that Boieldieu composed his earliest works to texts written by his father (La fille coupable in 1793, followed by Rosalie et Mirza in 1795). They brought him immediate success.

During the Revolutionary period, Boieldieu left for Paris and wisely started work as a piano tuner. At this time, the Opéra-Comique was the only theatre to offer opportunities for the hybrid works of the same name, close to classic opera, but containing spoken dialogue. The most typical work of the genre was Luigi Cherubini's Médée (1797). Opéra-comique, traditionally performed at the Salle Favart, was also staged at the Théâtre de Monsieur from 1789. In 1791, the company set up home in a new theatre, the Théâtre Feydeau, previously reserved for the troupe of the opera buffa. Over the course of ten years, the Favart and the Feydeau companies were rivals, the Favart beefing up its repertoire of patriotic spectacles and presenting the lighter works of Étienne Méhul, the Feydeau offering the heroic dramas of Cherubini or Jean-François Le Sueur. In 1797, Boieldieu offered the Feydeau La famille suisse and L'heureuse nouvelle. In 1798, he presented the Favart with Zoraime et Zulmare, which brought him extraordinary success.

The spiritual heir of André Grétry, Boieldieu focused on melodies which avoided too much ornamentation, set to light but intelligent orchestration. Hector Berlioz described his music as possessing "a pleasing and tasteful Parisian elegance". In 1800, he scored a veritable triumph with Le calife de Bagdad. In 1804, following the breakdown of his marriage to the dancer Clotilde Mafleurai,[2] he set off for Saint Petersburg to take up the post of court composer to the tsar, where he stayed until 1810. There he composed nine operas, including Aline, reine de Golconde (1804) and Les voitures versées (1808). On his return to France he won back Parisian audiences with La jeune femme en colère (1811), Jean de Paris (1812), Le nouveau seigneur du village (1813) and a dozen other works.

In 1825 he produced his masterpiece, La dame blanche (revived in the Salle Favart in 1997 and recorded by the conductor Marc Minkowski). Unusual for the time, La dame blanche was based on episodes from two novels by Walter Scott. The libretto by Eugène Scribe is built around the theme of the long lost child fortunately recognized at a moment of peril. The style of the opera influenced Lucia di Lammermoor, I puritani and La jolie fille de Perth. La dame blanche was one of the first attempts to introduce the fantastic into opera.

Although his reputation is largely based upon his operas, Boieldieu also composed other works. Among them was his Harp Concerto in C, written in 1800–1801 and one of the masterpieces of the harp repertory. He became professor of composition at the Paris Conservatoire and in 1817 he succeeded Méhul as one of the forty members of the Académie des Beaux-Arts. He received the Légion d'honneur in 1820. He gradually lost the ability to speak, no doubt due to cancer of the larynx. The bankruptcy of the Opéra-Comique and the revolution of 1830 added to his woes. To save him from poverty, Adolphe Thiers awarded him a state pension of 6,000 francs. On September 25, 1834, he made his last public appearance at the premiere of Adolphe Adam's Le chalet. In this way, he stylishly passed on the baton to his brilliant pupil.

Boieldieu died in Varennes-Jarcy. On 13 November 1834 his heart was interred in Rouen, in a tomb paid for by that city, while his body was interred in Père Lachaise Cemetery in Paris. He was survived by an illegitimate son (Adrien) Louis (Victor) (1815–83), mother Thérèse Regnault; he was also a composer.[6]

This article uses material from the article François-Adrien Boieldieu from the free encyclopedia Wikipedia and it is licensed under the GNU Free Documentation License.

Wojciech Dankowski Sinfonie Es-Dur
Update Required To play the media you will need to either update your browser to a recent version or update your Flash plugin.