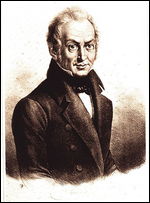 Zingarelli was born in Naples, where he studied (from the age of 7) at the Santa Maria di Loreto Conservatory under Fenaroli and Speranza.

In 1789–1790 Zingarelli went to Paris to compose Antigone. He left France hurriedly at the time of the revolution and eventually returned to Italy. He was appointed maestro di cappella at Milan Cathedral in 1793, and remained there until 1794, when he took up the prestigious post of maestro di cappella at the Santa Casa, Loreto.[1]

In 1804, Zingarelli was appointed choir master of the Sistine Chapel in Rome. In 1811 he refused profusely, as an Italian patriot, to conduct a "Te Deum" for Napoleon's son, newly born and known as King of Rome, in St. Peter's, Rome and he was taken as a prisoner to Paris. However, Napoleon père was a fan of Zingarelli's music and so quickly released him. In addition, Zingarelli was awarded a state pension.

In 1813, Zingarelli moved to Naples, where he became Director of the Conservatory. See: List of music students by teacher: T to Z#Niccolò Antonio Zingarelli. Then in 1816 he replaced Giovanni Paisiello as choir master of Naples Cathedral, a position he held until his death in 1837.

He died at Torre del Greco in 1837. Bellini wrote a sinfonia funebre for his funeral.

In his early career Zingarelli concentrated on writing opera; his debut was with the opera seria Montezuma, given at San Carlo on 13 August 1781, which aroused some interest, although the public in Naples found it too “learned”. Indeed, in 1785 Haydn revived it at the Eszterháza theatre.

Antigone, in which Zingarelli adopted some of the reform principles of French opera, won little favour in Paris; after that he eschewed innovation and contented himself with tried and tested formulae.

Zingarelli wrote 37 mainly comic operas in all in a prolific career. Between 1785 and 1803 he wrote mainly for La Scala of Milan, the first to be produced here being Alsinda. He achieved immediate success with Il mercato di Monfregoso and La secchia rapita. However Giulietta e Romeo is nowadays often considered his best opera. His last opera Berenice achieved considerable success in his lifetime after its initial production in Rome.

There are 4 doubtful works; and 17 operas were lost including:

Being a deeply religious Catholic, Zingarelli devoted most of his attention to masses, oratorios, cantatas, and motets. For Loreto he composed 541 works, including 28 masses. In 1829 he wrote a cantata for the Birmingham Festival. Less than a month before his death he produced an oratorio, "The Flight into Egypt", and his requiem mass, composed for his own funeral, is said to embody his most devotional church style.

Zingarelli wrote two influential books of partimenti, which are the biggest corpus of partimenti after those of Fedele Fenaroli.[2]

This article uses material from the article Niccolò Antonio Zingarelli from the free encyclopedia Wikipedia and it is licensed under the GNU Free Documentation License.

Ludwig van Beethoven Leonoren-Ouvertüre Nr. 1 op. 138
Update Required To play the media you will need to either update your browser to a recent version or update your Flash plugin.