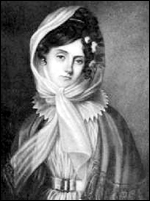 born in 1789 in Warschau, Masowien, Poland

Maria Szymanowska (Polish pronunciation: [ˈmarja ʂɨmaˈnɔfska]; born Marianna Agata Wołowska; Warsaw, December 14, 1789 – July 25, 1831, St. Petersburg, Russia) was a Polish composer and one of the first professional virtuoso pianists of the 19th century. She toured extensively throughout Europe, especially in the 1820s, before settling permanently in St. Petersburg. In the Russian imperial capital, she composed for the court, gave concerts, taught music, and ran an influential salon.

Her compositions—largely piano pieces, songs, and other small chamber works, as well as the first piano concert etudes and nocturnes in Poland—typify the stile brillant of the era preceding Chopin. She was the mother of Celina Szymanowska, who married the Polish Romantic poet Adam Mickiewicz.

Marianna Agata Wołowska was born in Warsaw, Poland on December 14, 1789 into a prosperous Polish family. Her father Franciszek Wołowski was a landlord and a brewer. Her mother Barbara Wołowska (née Lanckorońska) came from a noble Polish Lanckoroński family.[1] The history of her early years and especially her musical studies is uncertain; she appears to have studied piano with Antoni Lisowski and Tomasz Gremm,[2] and composition with Franciszek Lessel, Józef Elsner and Karol Kurpiński. She gave her first public recitals in Warsaw and Paris in 1810.

In the same year, she married Józef Szymanowski (d. 1832), with whom she had three children while living in Poland: Helena (1811–61), who married a Polish lawyer Franciszek Malewski, and twins Celina (1812–55), who married Adam Mickiewicz, and Romuald (1812–40), who became an engineer). The children remained with Maria after her separation from Szymanowski in 1820. The marriage ended in divorce.

Szymanowska died of cholera during the summer 1831 epidemic in St Petersburg.[2]

She is presumed to be unrelated to Karol Szymanowski, considered to be the most famous Polish composer of the 20th century.[3]

Her professional piano career began in 1815, with performances in England in 1818, a tour of Western Europe 1823–1826, including both public and private performances in Germany, France, England (on multiple occasions), Italy, Belgium and Holland. A number of these performances were given in private for royalty; in England alone during 1824, her performance schedule included concerts at the Royal Philharmonic Society (May 18, 1824), Hanover Square (with members of the royal family present, June 11, 1824), and other performances for several English dukes.

Her playing was very well received by critics and audiences alike, garnering her a reputation for a delicate tone, lyrical sense of virtuosity and operatic freedom. She was one of the first professional piano virtuosos in 19th-century Europe and one of the first pianists to perform memorized repertoire in public, a decade ahead of Franz Liszt and Clara Wieck-Schumann. After years of touring, she returned to Warsaw for some time before relocating in early 1828, first to Moscow and then to St. Petersburg, where she served as the court pianist to the tsarina.

Szymanowska composed around 100 piano pieces. Like many women composers of her time, she wrote music predominantly for instrumentation she had access to, including many solo piano pieces and miniatures, songs, and some chamber works. Her work is typically labeled, stylistically, as part of the pre-romantic period stile brillant and of Polish Sentimentalism. Szymanowska scholar Sławomir Dobrzański describes her playing and its historical significance as follows:

Her Etudes and Preludes show innovative keyboard writing; the Nocturne in B flat is her most mature piano composition; Szymanowska's Mazurkas represent one of the first attempts at stylization of the dance; Fantasy and Caprice contain an impressive vocabulary of pianistic technique; her polonaises follow the tradition of polonaise-writing created by Michal Kleofas Ogiński. Szymanowska's musical style is parallel to the compositional starting point of Frédéric Chopin; many of her compositions had an obvious impact on Chopin's mature musical language.[4]

While scholars have debated the reach of her influence on her compatriot Chopin,[5] her career as a pianist and composer strikingly foreshadows his own, as well as the broader trend in 19th-century Europe of the virtuoso pianist/composer, whose abilities as a performer expanded her technical possibilities as a composer.

Because of her stature as a performance artist and because of her salon, Szymanowska developed a strong web of connections with some of the most notable composers, performing musicians, and poets of her day, including: Luigi Cherubini, Gioacchino Rossini, Johann Hummel, John Field; Pierre Baillot, Giuditta Pasta; Johann Wolfgang von Goethe and Adam Mickiewicz. Hummel and Field dedicated compositions to her. Goethe is rumored to have fallen deeply in love with her. The salon she established in St. Petersburg drew especially prominent crowds, augmenting her status as a court musician.

This article uses material from the article Maria Agata Szymanowska from the free encyclopedia Wikipedia and it is licensed under the GNU Free Documentation License.