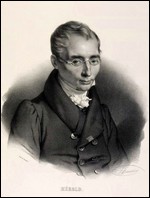 Louis Joseph Ferdinand Hérold (January 28, 1791  January 19, 1833), better known as Ferdinand Hérold (French pronunciation: [fdin eld]), was a French operatic composer of Alsatian descent who also wrote many pieces for the piano, orchestra, and the ballet. He is best known today for the ballet La fille mal gardée and the overture to the opera Zampa.

L.J.F. Hérold was born in Paris, the only child of François-Joseph Hérold, a pianist and composer, and Jeanne-Gabrielle Pascal. He was the grandson of Nicolas Hérold, an organist. At the age of six, he attended the Hix Institute and excelled in his studies. While there, he also took musical theory with François-Joseph Fétis (who later edited the periodical La Revue Musicale). At the age of seven, he played piano and composed some piano pieces.

Hérold's father did not intend for him to follow a musical career, but after his father's death in 1802, he could finally pursue this avenue. He enrolled in the Conservatoire in 1806 and was schooled in piano by Louis Adam (father of the composer Adolphe Adam). He also was instructed by Charles Simon Catel (in harmony), Rodolphe Kreutzer (in violin), and Étienne Méhul (in composition). Hérold during these times at the Conservatoire became a virtuoso on piano and violin.

In 1810 he won first prize in a piano competition with one of his own compositions, which had never been done before. One of the judges remarked: "This piece is full of flaws, but I see great things ahead for him." He progressed so far in his studies that in 1812 he won the Prix de Rome. In Rome, during the spring of 1813 he composed his first symphony, which all Prix de Rome winners were required to do in order to show their progression in studies, and also completed the last of his four piano concertos.

In 1815 he moved from Rome to Naples for health reasons. While there he composed several pieces including his second symphony and three string quartets. His first opera, La gioventù di Enrico Quinto, was presented at San Carlo (under the pseudonym Landriani), and it was received favorably by the public (who did not favour French composers), but not by the composers of the area. He was also paid 5,000 lira to teach Joachim Murat's daughters. After the king was executed, Hérold was forced to leave Italy and went to Austria, where he stayed in Vienna for two months under the employ of Prince Metternich. He returned to Paris via Munich and Switzerland.

In 1816, Hérold collaborated with François Adrien Boieldieu in the opera Charles de France; this work put his name before the public. In the same year he composed the successful opera Les Rosières which he dedicated to his friend and former teacher Méhul. In 1817 his opera La clochette premiered and was a vast improvement over Les rosières. After struggling to find a libretto, he composed music for Premier Venu. However, this did not have the qualities to be an opera and it met with little success. Les troqueurs (1819) also failed.

Hérold's desire to compose forced him to choose any libretto that came his way since many librettists did not trust him with their works. Therefore, his next few operas (L'amour platonique and L'auteur mort et vivant) were failures. This discouraged Hérold, so he did not produce any operas for three years.

In 1821 he became an assistant at the Théâtre-Italien and traveled to Italy to recruit singers. This renewed his inspiration and his health. In 1823 he returned to the stage with the success Le muletier. His next opera, Lasthénie, was a moderate success. Hérold collaborated with Daniel Auber on Vendôme en Espagne (1823) which capitalized on the fad for Spanish atmosphere, following the French victory at Trocadero in Spain.

In 1824 the Opéra-Comique commissioned him to write Le roi René. In the same year he became accompanist at the Théâtre Italien, and two years later became chorus-master. In 1825 he wrote Le lapin blanc which failed; Hérold himself was not inspired by its libretto to compose good music.

His next opera Marie (1826) was a great success, but his duties at Théâtre Italien hindered his freedom to exploit this and further his talent, and for the next three years was reduced to writing ballet music. In 1827, he became the chief replacement at the Paris Opera. On November 3, 1828 he was awarded the Legion of Honor. His next opera Lillusion (1829) was successful while Emmeline (1830) was not.

On May 3, 1831, one of his most famous operas, Zampa, premiered. This opera enjoyed much success in France and Germany where it is still occasionally staged today. He followed up his success with Zampa with contributions to La marquise de Brinvilliers, a collaborative effort of many composers including François-Adrien Boïeldieu and Daniel Auber.

He wrote La médecine sans médecin in 1832 and Le Pré aux Clercs later in the same year. Le Pré aux Clercs is another of Hérold's most famous works. Le Pré aux Clercs enjoyed its thousandth performance in Paris in 1871. A month after its premier, Hérold died at Thernes, of tuberculosis from which he had long suffered. Hérold's opera Ludovic which had not been completed was finished by Fromental Halévy.

Hérold was buried at Père Lachaise Cemetery in Paris. The house at 10 rue Hérold is Hérold's birthplace. The street was named in his honor in 1881.

This article uses material from the article Ferdinand Hérold from the free encyclopedia Wikipedia and it is licensed under the GNU Free Documentation License.