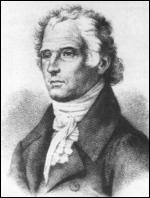 Bortniansky is best known today for his liturgical works and his prolific contributions to the genre of choral concertos.[4] He was one of the "Golden Three" of his era, along with Artemy Vedel and Maksym Berezovsky. Bortniansky composed in many different musical styles, including choral compositions in French, Italian, Latin, German and Church Slavonic.

Dmitry Bortniansky was born on 28 October 1751 in the city of Hlukhiv (the present-day Ukraine), then a part of the autonomous Cossack Hetmanate within the Russian Empire (as Glukhov), into the family of Stefan Skurat (or Shkurat), a Lemko-Rusyn Orthodox religious refugee from the village of Bortne in the Malopolska region (he was entered in the Cossack register of Glukhov in 1755).[5] At the age of seven, Dmitry's prodigious talent at the local church choir afforded him the opportunity to go the capital of the empire and sing with the Imperial Chapel Choir in St. Petersburg. There he studied music and composition under the director of the Imperial Chapel Choir, the Italian master Baldassare Galuppi. When Galuppi left for Italy in 1769, he took the boy with him. In Italy, Bortniansky gained considerable success composing operas: Creonte (1776) and Alcide (1778) in Venice, and Quinto Fabio (1779) at Modena. He also composed sacred works in Latin and German, both a cappella and with orchestral accompaniment (including an Ave Maria for two voices and orchestra).

Bortniansky returned to the Saint Petersburg Court Capella in 1779 and flourished creatively. He composed at least four more operas (all in French, with libretti by Franz-Hermann Lafermière): Le Faucon (1786), La fête du seigneur (1786), Don Carlos (1786), and Le fils-rival ou La moderne Stratonice (1787). Bortniansky wrote a number of instrumental works at this time, including piano sonatas and a piano quintet with harp, and a cycle of French songs. He also composed liturgical music for the Orthodox Church, combining the Eastern and Western European styles of sacred music, incorporating the polyphony he learned in Italy; some works were polychoral, using a style descended from the Venetian polychoral technique of the Gabrielis.

After a while, Bortniansky's genius proved too great to ignore, and in 1796 he was appointed Director of the Imperial Chapel Choir, the first director not to have been imported from outside of the Russian Empire. With such a great instrument at his disposal, he produced scores upon scores of compositions, including over 100 religious works, sacred concertos (35 for four-part mixed choir, 10 for double choruses), cantatas, and hymns.

Dmitry Bortniansky died in St. Petersburg on 10 October 1825, and was interred at the Smolensky Cemetery in St. Petersburg. His remains were transferred to the Alexander Nevsky Monastery in the 20th century.

In 1882, Pyotr Tchaikovsky edited the liturgical works of Bortniansky, which were published in ten volumes. While Dmitry Bortniansky wrote operas and instrumental compositions, it is his sacred choral works that are performed most often today. This vast body of work remains central not only to understanding 18th-century Orthodox sacred music, but also served as inspiration to his fellow Ukrainian composers in the 19th century.

The tune he wrote for the Latin hymn Tantum Ergo eventually became known in Slavic lands as (Kol slaven), in which form it is still sung as a Christmas carol today. The tune was also popular with freemasons. It travelled to English speaking countries and came to be known by the names Russia, St. Petersburg or Wells. In Germany, the song was paired with a text by Gerhard Tersteegen, and became a well-known chorale and traditional part of the military ceremony Großer Zapfenstreich (the Grand Tattoo), the highest ceremonial act of the German army, rendered as an honor for distinguished persons on special occasions. Prior to the October revolution in 1917, the tune was played by the Moscow Kremlin carillon every day at midday.

James Blish, who novelized many episodes of the original series of Star Trek, noted in one story, Whom Gods Destroy, that Bortniansky's Ich bete an die Macht der Liebe was the theme "to which all Starfleet Academy classes marched to their graduation."

Wrote "The Angel Cried" (hymn to the Mother of God used at Pascha), used by many Orthodox churches in the US.

This article uses material from the article Dmitry Bortniansky from the free encyclopedia Wikipedia and it is licensed under the GNU Free Documentation License.

Johannes Brahms Allegretto grazioso aus der Bratschensonate f-moll op. 120 Nr. 1
Update Required To play the media you will need to either update your browser to a recent version or update your Flash plugin.