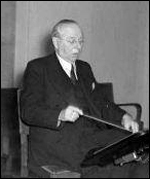 Edvard Armas Järnefelt (14 August 1869 – 23 June 1958), was a Finnish conductor and composer, who achieved some minor success with his orchestral works Berceuse and Praeludium. He spent much of his conducting career at the Royal Swedish Opera in Stockholm, Sweden.

Armas Järnefelt was born in Vyborg, in the Grand Duchy of Finland, the son of General August Aleksander Järnefelt and Elisabeth Järnefelt (née Clodt von Jürgensburg).

Järnefelt studied with Ferruccio Busoni in Helsinki and with Jules Massenet in Paris. Both Järnefelt and Busoni enjoyed a close relationship with Jean Sibelius, who was married to Järnefelt's sister Aino. From 1905 Järnefelt had a long career as conductor at the Royal Swedish Opera in Stockholm, beginning as repetiteur from 1905-1911 (he became a Swedish citizen in 1909); conductor 1911-1923 and chief conductor 1923-1933.[1]

Between 1932-36 Järnefelt was the artistic director and conductor of the Finnish National Opera. He presented, among others, Siegfried and Götterdämmerung from Wagner's Ring cycle, and Parsifal. He was principal conductor of the Helsinki Philharmonic Orchestra 1942–1943, and also returned to the Royal Swedish Opera as chief conductor from 1938 to 1946.[2] He died in Stockholm.

In addition, he composed more than 70 solo songs, 21 pieces for male chorus, 12 part-songs for mixed chorus, and 13 cantatas.

Järnefelt also wrote stage and film music, e.g. for the film Song of the Scarlet Flower (1919), directed by Mauritz Stiller, possibly the first original film music by a Nordic composer.[3]

His siblings were Kasper Järnefelt, a critic and translator of Russian literature; the writer Arvid Järnefelt (the incidental music for his play Kuolema was written by Jean Sibelius); the painter Eero Järnefelt (Erik); Ellida; Ellen, Aino (who married Sibelius); Hilja; and Sigrid.

He was married twice: firstly to the soprano Maikki Järnefelt (née Pakarinen) from 1893-1908 (she subsequently married Selim Palmgren), and secondly in 1910 to the opera singer Olivia Edström.

In June 2012 a display of Järnefelt paraphernalia was opened in the entrance of the Sibelius Academy situated in the Helsinki Music Center.

This article uses material from the article Armas Järnefelt from the free encyclopedia Wikipedia and it is licensed under the GNU Free Documentation License.

Wolfgang Amadeus Mozart "Un bacio di mano", Arietta KV 541
Update Required To play the media you will need to either update your browser to a recent version or update your Flash plugin.