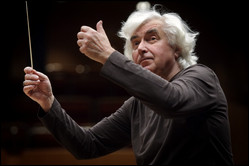 He was born in Leningrad, Soviet Union and studied at the Glinka Conservatory and those of Leningrad and Moscow. He was a prizewinner in the first Herbert von Karajan competition in 1969.[1]

This article uses material from the article Dmitri Kitayenko from the free encyclopedia Wikipedia and it is licensed under the GNU Free Documentation License.

Felix Mendelssohn-Bartholdy Andante con moto tranquillo aus dem Trio d-moll op. 49
Update Required To play the media you will need to either update your browser to a recent version or update your Flash plugin.