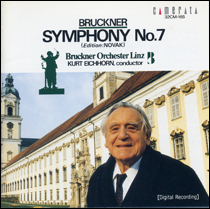 Eichhorn was born in Munich, the son of a painter. He studied music at the conservatory in Würzburg with Hermann Zilcher and progressed through provincial houses. His conducting debut was in 1932 as a conductor and choral conductor in Bielefeld. He also worked as a conductor in Teplitz-Schönau and Karlsbad. Hitler's annexation of the Sudetenland provided Eichhorn with career openings in Teplice (1939) and Karlovy Vary (1941–1943). He began conducting at the far more significant Dresden State Opera in 1941, and was a conductor of the Dresden Philharmonic in 1944.[1]

William Lloyd Webber Serenade für Streicher
Update Required To play the media you will need to either update your browser to a recent version or update your Flash plugin.