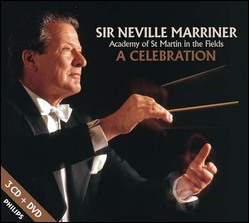 Neville Marriner, CH, CBE (15 April 1924 – 2 October 2016) was an English violinist who became "one of the world's greatest conductors". He founded the Academy of St Martin in the Fields, and his partnership with them is the most recorded of any orchestra and conductor.[1]

Marriner was born in Lincoln, England, the son of Herbert Marriner, a carpenter, and his wife Ethel (née Roberts).[1] He was educated at Lincoln School (then a grammar school), where he played in a jazz band with the composer Steve Race.[2] He initially learned the violin as well as the piano from his father, and later studied the violin with Frederick Mountney. In 1939, he went to the Royal College of Music in London,[3] getting the opportunity to play among the second violins of the London Symphony Orchestra, then conducted by Henry Wood, because many of its members had joined up after the outbreak of the Second World War.[4] He joined up himself in 1941, serving in a reconnaissance role in the British Army, but was invalided out in 1943 with kidney problems. He returned to the Royal College, where he continued his studies with the violinist Billy Reed. He then attended the Paris Conservatoire, where he studied with the violinist René Benedetti.[1][3][4]

Marriner was briefly a music teacher at Eton College.[3][4] In 1948, he became a professor of the Royal College of Music.[4] In 1948 or 1949, he took up the position of second violinist of the Martin String Quartet, continuing to play with the quartet for 13 years.[3][4][5] He had met the harpsichordist Thurston Dart while recuperating from kidney damage during the war, and they formed a duo together, which expanded to the Virtuoso String Trio with Peter Gibbs.[4] These were the precursors to Dart's Jacobean Ensemble, in which Marriner played from 1951.[3][4] He played the violin in two London orchestras: the Philharmonia Orchestra in the early 1950s, and the London Symphony Orchestra (LSO) as principal second violin (1954–69).[3][5][6] He also played with the chamber orchestras of Reginald Jacques and Boyd Neel, as well as the London Mozart Players.[3][4]

In 1958, he founded the Academy of St Martin in the Fields; initially a twelve-member chamber ensemble, it soon expanded to a chamber orchestra, and attracted musicians of a high calibre including Dart, Iona Brown, Christopher Hogwood and Alan Loveday. Marriner recorded prolifically with the Academy.[1][3][4] The first recordings in the early 1960s, with Marriner both conducting and playing lead violin, were successful, leading Pierre Monteux, then the LSO's conductor, to encourage Marriner to shift his focus to conducting.[3] Marriner had studied the subject with Monteux at his school in Hancock, Maine, in the United States, from around 1950.[4][7]

His obituary in The Telegraph praises the Academy of St Martin in the Fields' interpretations of baroque and classical music as "fresh, technically brilliant", and describes them as a "revelation".[4] Marriner preferred modern instruments and effects, and his work came under criticism by Hogwood, among others, for not striving for an authentic sound.[4] He later expanded the Academy's repertoire to include Romantic and early-modern music.[4]

Marriner made over 600 recordings covering 2,000 different works – more than any conductor except Herbert von Karajan.[4] He recorded for various labels, including Argo, L'Oiseau Lyre, Philips and EMI Classics. His recorded repertoire ranges from the baroque era[11] to 20th-century British music, as well as opera.[3] He supervised the Mozart selections for the soundtrack of the Oscar-winning 1984 film Amadeus; it became one of the most popular classical music recordings of all time, selling over 6.5 million copies.[1]

Marriner was married twice. His first wife was cellist (and later, antiquarian bookseller) Diana Carbutt, whom he married in 1949. They had two children, Susie, a writer, and Andrew, a clarinettist who often worked with his father and who is now principal clarinet of the London Symphony Orchestra. The marriage ended in divorce. His second wife was Elizabeth Mary Sims, known as Molly; they married in 1957.[1][4][12] He lived in London, and in later life also had a house near Chardstock in Devon.[4] Asked for an epitaph for his gravestone, he replied simply: “Follow the beat.”[13] Marriner died on 2 October 2016, at the age of 92.[1][4]

This article uses material from the article Neville Marriner from the free encyclopedia Wikipedia and it is licensed under the GNU Free Documentation License.

Michail Ippolitov-Ivanov Armenische Rhapsodie op. 48
Update Required To play the media you will need to either update your browser to a recent version or update your Flash plugin.