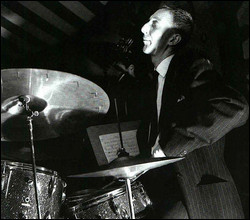 With a background in big band music,[1] Seamen played and recorded in a wide range of musical contexts with virtually every key figure of 1950s and 1960s British jazz. Notable examples included Joe Harriott, Tubby Hayes, Stan Tracey, Ronnie Scott, Dick Morrissey, Harold McNair, Don Rendell, Victor Feldman, Dizzy Reece, Tony Coe, Tony Lee, and George Chisholm, among others. Later in his career he worked with Alexis Korner and Georgie Fame, and had a spell with Ginger Baker's Air Force, the leader of the band being Seamen's foremost disciple. Addiction to alcohol and other drugs hampered his career.

Seamen began playing drums at the age of six, turning professional at the age of 18 by joining Nat Gonella and his Georgians in 1944. He joined the Tommy Sampson Orchestra in 1948, and by 1949, Seamen and tenor saxist Danny Moss had formed a bebop quintet from within the ranks and which was featured on a radio broadcast by the orchestra in September 1949.

He then went on to play in the Joe Loss Orchestra for about 14 months, the most popular dance band of the time. Then the top job with Jack Parnell from 1951 until midway '54, from 12 to 17-piece band. Seamen was much sought after during the 50s, also playing in Kenny Graham's Afro-Cubists projects from 1952 to '58, from 1954 onwards with the Joe Harriott Quartet, the Ronnie Scott Orchestra and Sextet, and an ever extending list including Dizzy Reece, Victor Feldman, Jimmy Deuchar, Kenny Baker, Vic Ash, Don Rendell, Stan Tracey, Laurie Johnson, as well as blues stars Big Bill Broonzy and Josh White, countless sessions.

He married the young West End dancer Leonie Franklin in 1956, whom he had met while with Parnell, working together in the show Jazz Wagon. On 8 February 1957, Seamen was finally on his way to America, about to fulfill a lifelong dream. The Ronnie Scott Sextet were going over on the Queen Mary to do a tour as part of a Musicians' Union exchange deal. But going through customs in Southampton prior to boarding, custom officiers took him aside and he was found to be in possession of drugs; he never visited the States.

In 1958 the West End production of West Side Story opened with him - Leonard Bernstein reputedly specifically asked for him and the producers hired him.

During the first half of the 60s he worked often with Tubby Hayes, and Joe Harriott. In 1962 he played a couple of nights with Dexter Gordon at Ronnie Scott's, recorded with Carmen McRae, in 1964 played r&b with Alexis Korner and Georgie Fame. He started teaching in 1962, one of his pupils being Ginger Baker,[1] who went on to influence a whole generation of rock drummers.

However, his heroin addiction meant his health was deteriorating, and increasingly many bandleaders would no longer hire him; his employment was limited to occasional sit-ins at Ronnie Scott's.

Notable exceptions were with Freddie Hubbard in 1964 and Roland Kirk in 1967 (followed by a UK tour).

From 1965-66 his regular gig was with the Dick Morrissey Quartet. Seamen also worked with the Harry South Big Band, in 1967 with Stan Tracey and Joe Harriott. In 1967 fellow drummer Philly Joe Jones, who was living in England at the time, met Seamen and the two men became good friends. Other American colleagues, Gene Krupa, Louis Bellson and Kenny Clarke, also held Seamen in high regard. He studied tympani at the Royal School of Music briefly with Sir James Blades: "Phil was so enthusiastic to begin with, but increasingly didn't show up. It was the drugs, you know. It was so sad. He was a percussion genius."

In the 1960s, Phil Seamen made appearances at the Midland Jazz Club in Birmingham at Digbeth Civic Hall. He can also be heard from this time on the album "Clarinet Jamboree" with clarinet players Acker Bilk, Terry Lightfoot, Sandy Brown and Archie Semple. He accompanies Sandy Brown, and plays in a remarkable modern jazz style in "The Last Western".

After the break-up of Cream and the short-lived Blind Faith, Ginger Baker formed his own group Air Force, initially for just two concerts, and asked Seamen to join.

The première was at the Royal Albert Hall on 17 January 1970. Seamen did a series of concerts with Air Force, but by May found the music too shallow. "Too bloody loud!" was his comment. But this taste of super-stardom seemed to jolt Seamen into some kind of new found self-respect. He formed a quartet with Derek Humble in 1970, but Humble died in January 1971. Seamen then worked regularly with the Brian Lemon Trio, and played with Tony Coe and Tubby Hayes.

In May 1972 the co-operative group Splinters, an initiative by Stan Tracey, played their first gig. An all-star improvising group, the object was to bring together musicians with different backgrounds: Tubby Hayes, Trevor Watts, Kenny Wheeler, Tracey, Jeff Clyne, John Stevens and Seamen. Seamen had always been wary of 'free jazz' but here, as he had done in Joe Harriott's freeform quintet, he played 'time'.

Seamen was almost as well known for his dishevelled lifestyle as for his drumming. He was equally known for his sharp wit. Demonstrating his skills as a raconteur, an entire side of the LP The Phil Seamen Story was devoted to Seamen's spoken retrospective on his career. In 2009, highlights of his playing from between 1953 and 1972 was released as The Late Great Phil Seamen on SWP Records, compiled by Michael Baird.

Whereas he had been a jazz star and acclaimed drummer throughout the 1950s, as the 1960s progressed his heroin addiction took an increasing toll. On 13 October 1972 Seamen, then 46, died while asleep in his flat in Old Paradise Street in Lambeth, south London.[2] He was cremated at Golders Green Crematorium.

A photograph of Seamen is included in the collection at the National Portrait Gallery.[3]

He can be seen on DVD backing the multi-instrumentalist Roland Kirk in the documentary film Sound (1967).

This article uses material from the article Phil Seamen from the free encyclopedia Wikipedia and it is licensed under the GNU Free Documentation License.