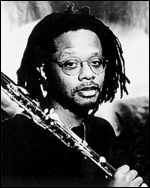 Donald Byron (born November 8, 1958) is an American composer and multi-instrumentalist. He primarily plays clarinet, but has also used bass clarinet and saxophones.

Though rooted in jazz, Byron's music is stylistically eclectic. He has worked in many different musical genres, ranging from klezmer music and German lieder, to Raymond Scott's "cartoon-jazz," hard rock/metal, and rap. Most of Byron's albums have been conceptual, devoted to works of a particular musician and/or style of music.

Byron was born in The Bronx, in New York City. Both parents were musicians: his mother was a pianist and his father played bass in calypso bands. As well as listening to jazz recordings by Dizzy Gillespie, Miles Davis and others, he was exposed to other styles through trips to the ballet and symphony concerts.[1]

He studied clarinet with Joe Allard[2] and studied music at the New England Conservatory in Boston with George Russell.[2] While in Boston, Byron performed and recorded with the Klezmer Conservatory Band, founded by NEC faculty member Hankus Netsky.

Byron is a gifted performer on clarinet, bass clarinet, and saxophone, but on many of his albums he subordinates his own playing to the exploration of a particular style. Byron is representative of a new generation of conservatory-trained jazz musicians who explore and record in a rich array of styles; his first album, Tuskegee Experiments, is a stew of classical avant garde and jazz improvisation, while albums such as Ivey Divey represent a straight-ahead exploration of the traditional jazz 'tune'.

Byron is a practicing jazz historian, and some of his albums have been recreations (in spirit) of forgotten moments in the history of popular music. Examples are Plays the Music of Mickey Katz and Bug Music.[3] Byron has been nominated for a Grammy Award for his bass clarinet solo on "I Want to Be Happy" from Ivey-Divey.

Byron has worked as a professor at Metropolitan State University of Denver (2015), The University at Albany (2005-2009) and MIT (2007-2008), teaching composition, improvisation, music history, clarinet, and saxophone.

Byron is a member of the Black Rock Coalition. He has recorded with Allen Toussaint, Marc Ribot, Vernon Reid, Bill Frisell, Joe Henry, and others.

Byron was a judge for the 2nd annual Independent Music Awards to support independent artists' careers.[4]

Byron was named a 2007 USA Prudential Fellow[5] and awarded a US$50,000 grant by United States Artists, a public charity that supports and promotes the work of American artists. He also won a Guggenheim Fellowship in 2007.

Byron won the Rome Prize Fellowship awarded by the American Academy in Rome in 2009, and his Seven Etudes for solo piano, commissioned by pianist Lisa Moore, made him a finalist for the Pulitzer Prize in Musical Composition in 2009.

This article uses material from the article Don Byron from the free encyclopedia Wikipedia and it is licensed under the GNU Free Documentation License.