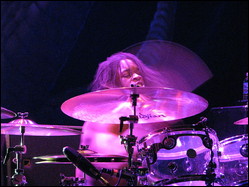 Thomas Armon Pridgen (born November 23, 1983 in Alameda County, California) is an American drummer, best known for his role as the drummer of The Mars Volta from October 31, 2006, until October 23, 2009. He is currently the drummer for his own project The Memorials as well as the Los Angeles-based crossover band Suicidal Tendencies. On 13 May 2013, it was officially announced via Twitter that Thomas Pridgen would be joining the California hardcore band, Trash Talk.

Pridgen won the Guitar Center Drum-Off at age 9 and at age 10 was the youngest recipient for a Zildjian endorsement in the nearly 400 year history of the company. Pridgen is also naturally left-handed, but plays the drum kit as if he is a right-hander with his kit set-up right-handed. Thomas has studied with David Garibaldi, Walfredo Reyes, Sr., Troy Lucketta, and Curtis Nutall. He endorses DW Drums, Zildjian Cymbals, Evans Drumheads, Audix Microphones, and ProMark Drumsticks. Thomas was also the recipient of a 4 year scholarship to Berklee College of Music in 1999 at the age of 15; he was the youngest musician to ever receive this scholarship.[1] He has played in clinics with Walfredo Reyes, Jr. and Dennis Chambers. By his teenage years he had already done studio sessions with many Bay Area Gospel artists.

Thomas's first non-gospel touring experience was as the drummer for The Coup, who he worked with in 2001 and 2002. [2]

In 2006, Pridgen received a call from Omar Rodríguez-López of The Mars Volta:

In 2007, Pridgen became the new permanent drummer for The Mars Volta. Pridgen's first appearance was at the March 12th show in New Zealand, where the band debuted the song "Idle Tooth" which was later renamed "Wax Simulacra" for the forthcoming album. After shows in New Zealand and Australia, The Mars Volta toured a few West Coast venues as the headliner, then entered the studio to record their fourth LP, The Bedlam in Goliath.[4] Pridgen's style on Bedlam in Goliath used "blistering 32nd-note full-set combinations, stunning single-stroke rolls, and blazing single bass drum patterns"[3] along with creative and precise paradiddle technique.

Thomas Pridgen has been voted as Best Up and Coming Drummer by Modern Drummer magazine.

Besides his work with The Mars Volta, he has also been involved with Christian Scott and Wicked Wisdom. Thomas, for some time, was working with singer Keyshia Cole as her live and session drummer and being her music director. He also was featured alongside with Tony Royster Jr., Eric Moore, and others in drumming DVD entitled "Shed Sessions", a Gospel Chops DVD.

Thomas was also featured on the Modern Drummer 2008 DVD with footage from his performance at the festival.

On one of the last dates of the Bedlam Tour in Mexico, Thomas and the band 'wrecked' the kit and cracked the 20"x24" acrylic bass drum. After this Thomas was seen only using DW maple jazz kits live, but he now uses his Acrylic kit again with his new band The Memorials.

While not on tour or recording sessions, Thomas is also available for drum lessons mainly in San Francisco Bay Area.

In October 2009, Thomas Pridgen left The Mars Volta. To this day, the band has made no official statement as to the reason for the departure. Dave Elitch subsequently filled in the drummer position for the remainder of the tour, who was then replaced by Deantoni Parks.

On 10/14/2013, Juan Alderate (Mars Volta bassist) said on podcast Let There Be Talk ep#54, that "Thomas is an awesome musician, he just wasn't getting along with band. The final straw was when Thomas got drunk and pissed on the tour bus." [5]

By invitation of Elixir on Mute's headman Jordan Ferreira, Thomas Pridgen took part in the recording of the band's debut End of Sky (released September 1 2010).

Over the summer of 2011 it was announced that Thomas Pridgen was working on a new group with Mastodon vocalist and guitarist Brent Hinds, the Dillinger Escape Plan guitarist Ben Weinman, and former Jane's Addiction bassist Eric Avery.

November 10, 2011, the band had decided upon a name, Giraffe Tongue Orchestra. By then the supergroup was working on writing songs.[6]

Still working on his personal project The Memorials. Second album, Delirium, released on June 5, 2012. The track "Fluorescent's Unforgiving" was released via Soundcloud in November 2011. Going on another US tour with the band (summer 2012).

Spring of 2012, teamed up with guitarist, Eric McFadden (P-Funk, The Animals, Stockholm Syndrome), and Fishbone bassist, Norwood Fisher. phYne Entertainment produced five tracks for the new trio in a San Francisco studio. The project is called, TEN, as there is talk of a tour in the Fall.

Guest live drummer in support of Stephen Bruner's project Thundercat. Toured all over Europe in spring 2012.

European tour with The Memorials

After completing 3 tours (Freedom Tour, Equinox Tour, Waterguns, B B Q, & Hot Chocolate Tour) over the United States with The Memorials, the band are preparing for a European tour to launch in October 2012.

On 12 February 2013, Magna Carta released the Mike Varney-produced "Pinnick Gales Pridgen," featuring Eric Gales on guitar and vocals, dUg Pinnick (of King's X) on bass and vocals, and Pridgen on drums. The 13-track album features one cover song, "Sunshine of Your Love", originally by Cream, one short instrumental based on Ludwig van Beethoven's "Für Elise" (German pronunciation: [fy eliz], English: "For Elise"), and the remaining songs written by some combination of Pinnick, Gales, Pridgen and Varney.[8]

With The Mars Volta

With The Mars Volta

With Elixir on Mute

This article uses material from the article Thomas Pridgen from the free encyclopedia Wikipedia and it is licensed under the GNU Free Documentation License.