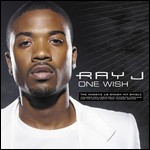 William Ray Norwood Jr. (born January 17, 1981),[1] known by his stage name Ray J, is an American singer, songwriter, record producer and actor. Born in McComb, Mississippi and raised in Carson, California, he is the brother of recording artist and actress Brandy Norwood.

William Ray Norwood Jr. was born in McComb, Mississippi to Willie Norwood and Sonja Bates-Norwood. His older sister Brandy is an award-winning, multi-platinum recording artist. His first cousin, Snoop Dogg, is a multi-platinum recording rapper.[2] Early in his life, he moved with his family from McComb, Mississippi to Los Angeles, California, and in 1989 started appearing in television commercials for different companies. In 1989, at the age of eight, Norwood began auditioning for and appearing in television commercials; he played the foster son in The Sinbad Show, from 1993 to 1994. This period in Norwood's life would shape his acting career. According to Bradley Torreano of allmusic, "his easygoing image and boyish looks appealed to the producers of Brandy's television show, Moesha, giving him a role on the UPN series as Dorian "D-Money", a role he played from 1999 until the show ended in 2001.

He signed to Elektra Records in 1995 and he began to record his debut album Everything You Want the same year. "Let It Go" appeared on the Set It Off soundtrack. It peaked number 25 in the U.S. and number 11 in New Zealand. The second single peaked at number 54 on the U.S. R&B chart. In 1997, he was dropped from the label. He produced, putting together the music for several commercials and a few of the demos for his second record.[1]

Ray J recorded "Another Day in Paradise" with Brandy, which was a Top Ten success in Austria, UK, Germany, Sweden, Switzerland, Belgium, Norway, Ireland, the Netherlands and number 11 in Australia and France. The song was the lead single of the R&B/Hip Hop tribute Urban Renewal, in which he co-produced and performed songs. Norwood also worked with The Neptunes, Rodney Jerkins and Lil' Kim, and several other producers and singers for his second studio album This Ain't A Game. The album was released in 2001. The lead single "Wait A Minute" peaked at #30 on the U.S. Hot 100 chart and #8 on the Hot R&B/Hip-Hop Songs chart. "Formal Invite" followed at #54 on the R&B chart.[3]

After a two year break, Norwood returned to recording studios, adding the finishing touches on his third studio album Raydiation with help from producers such as Rodney Jerkins, Timbaland, R. Kelly, and Rob Egerton. A joint venture by Sanctuary Records and Ray-J's own label, independent Knockout Entertainment, the album was finally released on September 27, 2005 in North America after several delays, debuting at number forty-eight on the Billboard 200 chart, selling 18,321 copies in the first week. The album's lead single "One Wish" was a top 20 success in the US, UK, Ireland, and New Zealand. Raydiation eventually sold over 400,000 copies domestically.[4]

In 2005, Norwood joined the cast of UPN's One On One,[5] where he played the character D-Mack for the final season. On both shows, Ray's character was related to Brandy's (cousin/half-brother on Moesha, brother on One on One).

Knockout Entertainment announced a multi-million dollar album deal with Koch Records and Shaquille O'Neal's "Deja 34" entertainment company.[4] The first album for this deal is Ray J's fourth album All I Feel, which features The Game and Yung Berg among others. It was released on April 1, 2008.[8] The album's first single is "Sexy Can I" featuring rapper Yung Berg peaked at number three on the Top Singles (Hot 100) for six weeks. A video for the track, directed by R. Malcolm Jones, was shot in December 2007.[4] J stars in the Black Christmas movie Dark Christmas under the direction from Deon Taylor.[9]

In 2009, Norwood starred in his own VH1 reality dating show, For the Love of Ray J. The show premiered on February 2, 2009. For his show on March 24, 2009 he released the soundtrack/studio album called For The Love Of Ray J. On November 2, 2009, the show's second season premiered. In 2010, Norwood and his sister Brandy Norwood premiered the VH1 reality series Brandy and Ray J: A Family Business along with their parents. The show debuted in April 2010 and chronicled the backstage happenings of both siblings, while taking a bigger role in their family's management and production company, R&B Productions.

On June 19, 2011, Ray J, along with his sister Brandy and his dad Willie Norwood Sr., released A Family Business, which serves as a soundtrack to their hit reality TV show, Brandy and Ray J: A Family Business, and was released through Time-Life Music.[10] He released a single from the album called "Turnin' Me On". The song will be featured on his upcoming album as well.

Ray J is currently working on his upcoming fifth studio album Raydiation 2. The lead single "I Hit It First" was released on April 6, 2013. "I Hit It First" caused controversy for allegedly aiming its lyrics at Kim Kardashian and Kanye West. The song has since debuted at #51 on the Billboard Hot 100.[11][12] Ray J is hosting Oxygen's new reality game show series Bad Girls All-Star Battle.

This article uses material from the article Ray J from the free encyclopedia Wikipedia and it is licensed under the GNU Free Documentation License.