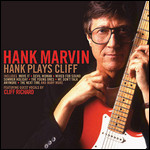 Hank Brian Marvin (born Brian Robson Rankin,[1] 28 October 1941)[2] is an English multi-instrumentalist, vocalist and songwriter. He is best known as the lead guitarist for the Shadows, a group which primarily performed instrumentals and was the backing band for Cliff Richard and subsequently for Marvin, Welch & Farrar.[2] Many leading British and Canadian rock guitarists cite Marvin as an influence.

Hank Marvin was born Brian Robson Rankin in Newcastle upon Tyne, England. As a child, he played banjo and piano. After hearing Buddy Holly, he decided to learn the guitar.[2]

He chose his stage name while launching his career. It is an amalgamation of his childhood nickname, Hank, which he used to differentiate himself from friends also named Brian, and Marvin Rainwater, the country and rockabilly singer.

Sixteen-year-old Marvin and his Rutherford Grammar School friend, Bruce Welch, met Johnny Foster, Cliff Richard's manager, at The 2i's Coffee Bar in Soho, London. Foster was looking for a guitarist for Cliff Richard's UK tour and was considering Tony Sheridan. Instead he offered Marvin the position. Marvin joined the Drifters, as Cliff Richard's group was then known, provided there was a place for Welch.

Marvin met Richard for the first time at a nearby Soho tailor's shop,[3] where Richard was having a fitting for a pink stage jacket. The Drifters had their first rehearsal with Richard at the Webb family home (Cliff's parents) in Cheshunt, Hertfordshire.

His first critically lauded, self-titled solo album of instrumentals, which featured guitar set to orchestrated backing, was released in 1969, following the first disbanding of the Shadows, in late 1968. The single "Sacha" topped the singles chart in New South Wales, Australia, having been 'discovered' by two DJs at 2WG Wagga Wagga.[4] Marvin's solo career was then suspended due to Shadows reunions, first for a Far East tour and 'live' album in 1969, then a studio album in 1970 (Shades of Rock) and again in the early 70s. He has experimented with styles and material, doing instrumental albums, some with mostly vocals (e.g. Words and Music, All Alone With Friends), one with only acoustic guitars and one with a guitar orchestra (The Hank Marvin Guitar Syndicate).

In 1970, Marvin and Welch formed Marvin, Welch & Farrar, a vocal-harmony trio which failed to appeal to Shadows fans or to contemporary music fans. They became 'Marvin & Farrar' for a vocal album in 1973 and then reverted to the Shadows in late 1973, for the instrumental Rockin' with Curly Leads album. The Shadows came second for the United Kingdom in the 1975 Eurovision song contest.

Marvin wrote "Driftin'", "Geronimo", "Spider Juice" (his daughter's name for orange juice), "I Want You to Want Me" for the Shadows, and "The Day I Met Marie". He co-wrote Richard's 1960 hit; 'Gee Whizz It's You' with Ian Samwell. With Welch, Brian Bennett, and John Rostill, he wrote hits for Cliff Richard, including; "On the Beach", "I Could Easily Fall in Love with You", "Time Drags By", and "In the Country".

In 1969 and 1970, he teamed with Richard for: two 'Cliff & Hank' hit singles, his own song; 'Throw Down a Line' (also recorded by Marvin, Welch & Farrar), and 'The Joy of Living', while Richard also had a hit with his ecology song, 'Silvery Rain'.

In 1977, Marvin played lead guitar on Roger Daltrey's third solo album, One of the Boys, on the tracks Parade and Leon. He co-wrote Olivia Newton-John's 1977 hit 'Sam' with John Farrar and Don Black, and produced albums for the British showman Des O'Connor.

In 1988, Marvin collaborated with French keyboardist and composer Jean Michel Jarre on the track "London Kid", on Jarre's Revolutions album and was a guest in the Jarre's Destination Docklands concert at London's Royal Victoria Dock. Jarre said the Shadows' success had influenced him and led to his decision to devote his career to instrumental music.

Marvin appeared with Leslie Nielsen in an advert for Red Rock Cider, which was done as a parody of Nielsen's Police Squad! films. In a bar scene, Nielsen calls out, "Hey, you over there, in the shadows!", after which Marvin steps forward. When Nielsen asks Marvin to "accompany" him (police talk for taking someone down to the station), Marvin literally accompanies him, on the guitar, as Nielsen sings the product's jingle.

In 1992, Duane Eddy guested on Marvin's album Into the Light on the track "Pipeline".

Marvin and the Shadows reformed for a 2004 Final Tour, and a 2005 European tour was also organised.

Marvin dueted twice with French guitarist Jean-Pierre Danel – on his 2007 and 2010 albums, both top-ten hits and certified gold. Their two singles hit the iTunes charts in France, Norway, Finland and Germany, and later (when released as an EP from Danel's compilation The Hit List) in Ireland, United Kingdom, Poland, United States, South Africa and Thailand. Marvin also participated on one of his DVDs and wrote the foreword for Danel's book about the Fender Stratocaster.

In London, Hank Marvin is cockney rhyming slang for "starvin" ("starving").[5] This slang was referenced in a 2012 television advertisement for Mattessons meat company.[6]

While Welch and Bennett became the Officers of the Order of the British Empire (OBE) in the 2004 Queen's Birthday Honours List for services to music, Marvin declined for "personal reasons".[7]

Since 1986, Marvin has lived in Perth, Western Australia. He has made impromptu appearances on stage when musician friends visit the area, such as in February 2013 when Cliff Richard held a concert at Sandalford Winery. He is a Jehovah's Witness.[10] Marvin runs a recording studio, Nivram studios, part of Sh-Boom studios in Tiverton Street, Perth, owned by Trevor Spencer and Gary Taylor. He has also developed a keen interest in the music of jazz guitar legend Django Reinhardt and performs regularly with his group, "Hank Marvin's Gypsy Jazz", whose repertoire consists of a mix of Reinhardt originals and new tunes composed in the gypsy jazz genre.

In Canada, Cliff Richard and the Shadows had top 10 hits, especially from 1961 to 1965. Canadian guitarists Randy Bachman and Neil Young credit Marvin as influential, Young penning the song "From Hank to Hendrix' on his Harvest Moon album in partial tribute.[20][21]

This article uses material from the article Hank Marvin from the free encyclopedia Wikipedia and it is licensed under the GNU Free Documentation License.