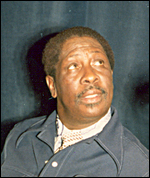 He began performing at the age of eight, and booked his first night club at the age of thirteen. His career took off after he moved to New York City in 1938. Early collaborations included Tab Smith, the Roy Eldridge Orchestra, and six years with Lucky Millinder's Orchestra at Harlem's Savoy Ballroom.

He is featured on hits by the Four Seasons ("Big Girls Don't Cry" and "Walk Like a Man"), the Platters ("Only You", "The Great Pretender", "Smoke Gets in Your Eyes" and "My Prayer"), Bobby Darin ("Splish Splash"), Neil Sedaka ("Calendar Girl"), and Dion ("The Wanderer").

He drummed on "Prisoner of Love" for James Brown, "What a Diff'rence a Day Makes" for Dinah Washington, "Drown in My Own Tears" for Ray Charles, "Patricia" for Perez Prado and "Jim Dandy" for LaVern Baker. Many music reference books indicate that he also played drums on Bill Haley & His Comets' 1954 version of "Shake, Rattle and Roll", but producer Milt Gabler denied this; Francis is also believed to have played drums for at least one other Haley recording session in the mid-1960s.

Francis received a Pioneer Award from the Rhythm and Blues Foundation in 1993 and was also inducted into the Smithsonian National Museum of American History. His drum sticks are on display at the Rock and Roll Hall of Fame.

This article uses material from the article Panama Francis from the free encyclopedia Wikipedia and it is licensed under the GNU Free Documentation License.

Felix Mendelssohn-Bartholdy Rondo capriccioso Op.14
Update Required To play the media you will need to either update your browser to a recent version or update your Flash plugin.