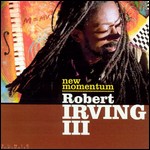 A native of Chicago, Irving was one of a group of young Chicago musicians that in the late '70s and early '80s formed the nucleus of Miles Davis' recording and touring bands. Irving left the Davis band in 1989, and has gone on to a prolific career as touring musician, composer, arranger, producer, educator and interdisciplinary artist. Irving resumed his career as a recording artist under his own name with the 2007 release of New Momentum and more recently with the release of "Our Space In Time" by Robert Irving III Generations (featuring students Irving mentored through the Jazz Institute of Chicago Jazz Links program).

Irving's first musical instrument was the bugle, followed by a range of brass instruments including cornet, French horn, and valve trombone. While he was a brass player, Irving also studied piano to further his knowledge of musical theory.

Irving's family moved to North Carolina in 1969 and remained there until 1978. While in North Carolina, Irving continued his studies in musical theory, played trombone in concert bands, keyboards for pop/funk and fusion bands, and organ and piano for gospel groups. Hammond organ and keyboards became his primary instruments.

After returning to Chicago in 1978, Irving connected with a number of young musicians, including Vince Wilburn Jr. and Darryl Jones who would later join him in the Miles Davis band. These musicians formed a series of bands, including Data and AL7. In 1979, AL7 was invited by arranger/producer Tom Tom 84 to record some demo tapes for Maurice White (of Earth, Wind, & Fire).

In 1980, an Irving composition entitled Space was played for Wilburn's uncle, Miles Davis. Space captured Davis' interest, and led to Irving, Wilburn and their band being invited to New York for Davis' first recording sessions in several years.

The fruits of these sessions were included on the 1981 album, The Man with the Horn, the first recording Davis had released in six years. The title track, The Man With the Horn, was co-written and arranged by Irving, who also co-wrote and arranged another track titled Shout.

Returning to Chicago, Irving continued his composing, arranging, and producing; notably, working on albums for Ramsey Lewis (1981 and 1982), Randy Hall, and others.

Also, in 1982 Irving became musical director and pianist for the Kuumba Theater production of The Little Dreamer… a Nite in the Life of Bessie Smith and studied stride-piano with the legendary Little Brother Montgomery, who had composed music for the show.

Then, in 1983 Davis invited Irving to once again return to work with him as composer, arranger and co-producer.

The initial Miles Davis–Robert Irving III collaboration resulted in the album Decoy. Irving then joined Davis' touring band, where he remained for five years, holding the keyboard chair and the role of musical director.

Notably, in the role of musical director, Irving was responsible for musical arrangements, rehearsals (which Davis never attended), and musical liaison between Davis and group members that included some of the leading musicians of the era, such as Al Foster, John Scofield, Bill Evans, Mike Stern, Gary Thomas, Bob Berg, Kenny Garrett, Hiram Bullock, Robben Ford, Joseph "Foley" McCreary and Darryl Jones. In those roles, Irving listened to recordings of each night’s performance with Davis to cull what were spontaneous creative ideas … that then became a permanent part of the group’s musical arrangements. Some of that work is finely exhibited on The Complete Miles Davis at Montreux collection.

Irving also collaborated with Davis (as composer, producer and arranger) on the 1985 recording, You're Under Arrest. The album included Grammy-nominated covers of “Time After Time” and “Human Nature.”

While working on the material for You're Under Arrest, Irving added to his arranging credentials by studying with Gil Evans, who decades earlier had famously arranged some of Miles Davis’ most celebrated recordings. This session also included a appearance by Sting, who did a spoken-word voice over in French on the title track.

Later, Irving extended this musical direction on projects such as his film score for the feature film Street Smart also with André Lassalle on guitar (1985), starring Morgan Freeman and Christopher Reeve—with Miles Davis as featured instrumentalist.

Irving remained with the Davis band until 1989, remaining close to Davis until Davis’ death in 1991.

Since leaving the Davis band, Irving has been based in Chicago and has kept active on many musical fronts, continuing to develop as a pianist, arranger, composer and producer. He has performed, as leader and sideman, with a list of musicians that includes David Murray, Wallace Roney, Eddie Henderson, Lenny White, and fellow Miles Davis alumni Darryl Jones, Vince Wilburn Jr., and Al Foster. He has contributed to these settings as composer and arranger and pianist.

In addition, Irving recorded as leader and music director of the Davis alumni bands ESP and ESP2, on a number of David Murray albums, as a member of Khalil El Zabar's Juba Collective, and with Wallace Roney. He has produced albums for, among others, Terri Lyne Carrington (Real Life Story, 1990) and More to Say (Real Life Story: NextGen.) (E1 Entertainment, 2009). In the Chicago community, Irving has taught and lectured at numerous schools, workshops and community events, and he founded Chicago's African Arts Ensemble (an 18-piece pan-African jazz group commissioned by the African Festival of the Arts).

With the 2007 release of New Momentum on the Sonic Portraits Entertainment label, Irving has returned to recording under his own name. The CD was co-produced by Terri Lyne Carrington.

The CD is a Billboard Magazine "critics' choice" (highly recommended for musical merit).

An excerpt of a The Billboard Review article - April 7, 2007 (by Dan Ouellette):

Conspicuously absent as a leader since serving as Miles Davis’ fusion-oriented musical director in the ‘80s, Robert Irving III returns in dramatic fashion on “New Momentum,” the premiere release for indie Sonic Portraits.

The disc is largely an acoustic piano trio date, highlighted by Irving originals and two nods to his mentor’s ‘60s repertoire: a buoyant cover of Davis’ “Seven Steps to Heaven” and a refined take on Wayne Shorter’s “Nefertiti”.

What’s so remarkable about Irving’s return from obscurity is the fresh, vital sound, spurred by his pianistic dynamism, and infused with an imaginative improvisational approach that encompasses dancing tempo shifts and harmonic curves. Bassist Buster Williams costars, with arco support on the ballad “Primordial Waters”, low-end punch to the title track and a walking bass conversation with Irving on the midtempo groove tune “Always . . . Sometimes”.

Irving is also a painter. When he was a member of Miles Davis’ band, Davis encouraged him to take up painting. Irving actually began painting regularly in 1997, and has seen his work exhibited in a number of galleries.

Robert Irving III conducted the debut performance of his “Sonic Portraits Orchestra” in the world premiere of “Sketches of Brazil to record crowd of 12,500 people receiving several standing ovations. The piece is his orchestral homage to his mentors, Miles Davis and Gil Evans, on the 50th anniversary of the recording of the pair’s classic, “Sketches of Spain.” The performance on the Jay Pritzker Pavilion stage at Millennium Park, in Chicago on Thursday August 13, 2009 featured trumpeter Wallace Roney as the principal soloist, and classical guitarist Fareed Haque as special guest, along with Brazilian percussionists Dede Sampaio and Felipe Fraga along with Miles Evans on trumpet in the orchestra (son of Gil Evans) in a blend of 33 classical and jazz musicians conducted by Irving at times from the piano. The Jazz Institute of Chicago sponsored a Symposium prior to the event with special guests from the families of Miles Davis and Gil Evans. Chicago Tribune Critic Howard Reich said of Irving’s work, “Extraordinarily ambitious… a tour de force of orchestral writing.” This project although video taped with five cameras and with professional audio recording has not yet been released.

Our Space In Time

This is the third album released under the name Robert Irving III Generations as a special group co-founded by Irving's wife, Lolo Irving in 2014 that featuring young musicians whom Irving mentored. The CD that entered the CMJ Chart at 30 and rose to 63 on the top 100 Jazz Week Chart, consists of 10 original compositions of Irving, four of which came to him in dreams.

Our Space In Time addresses such themes as the links between artist past and present, the balance of legacy and innovation, the significance of our current moment and the process of moving ahead. Robert Irving III, an under-promoted Chicago-based pianist and composer, has created a suite-like album that explores these concepts in progressive yet accessible contemporary jazz.

As a member of Miles Davis’ 1981 comeback band and later Davis’ music director, Irving rode a post-fusion wave when it was being supplanted by the Marsalis-led revival of hard-bop. Here he resurrects an alternative strategy that Wayne Shorter proposed in albums like Atlantis and High Life: tightly knit, complex charts for small ensembles that are flexible enough to couch striking personal statements but catchy enough to comfort audiences with an identifiable thread.

The band’s response to the issues raised by its leader is to play together, in the moment. — Howard Mandel

Robert Irving III explores radically different musical terrain in “Our Space in Time” (Sonic Portraits Jazz), his tenure as music director for Miles Davis from 1979 to 1988 reflected in the open-eared, open-minded, forward-looking nature of this venture. A heady, trippy foray into sonic experimentation, the album merges acoustic and electric instrumentation, avant-garde and pop-tinged idioms, splashes of color, hypnotic riffs, ethereal vocals and a great deal more.

No, this is not the sort of thing you would have heard in the London House in Novak’s day, but it offers a joyously freewheeling, genre-mixing spirit that proves difficult to resist. By turns gnarly and tuneful, rambunctious and meditative, “Our Space in Time” extends to septet the ebullient spirit that listeners associate with Irving’s pianism.

Part of the anything-goes nature of the venture surely owes to the multigenerational staffing of Irving’s band, aptly titled Generations. In effect, if Irving once was the up-and-coming player following trumpet icon Davis’ lead, now the pianist serves as the mentor, drawing as much energy and inspiration from his proteges as Davis surely did from him. Bringing Irving’s vision to life are alto saxophonist Laurence d’Estival Irving (the pianist’s wife), guitarist Scott Hesse, saxophonists Rajiv Halim and Irvin Pierce, bassist-vocalist Emma Dayhuff and drummer Charles “Rick” Heath.

Irving’s poetic philosophizing on a few tracks may seem a bit loopy to some, but not to anyone who has traveled in the orbit of Sun Ra, the jazz visionary whose “space is the place” mantra clearly has cast a spell on Irving. And though it takes too many tracks before Irving and the Generations calm down a bit, when they finally do, on “Octobre,” they’ve arrived at one of Irving’s mostly beautifully crafted ballads.

All of which goes to show that, in Chicago, buoyant new music rises up at all times of year, including when you least expect it.

Robert Irving III is a recipient of the Chicago Music Awards, Lifetime Achievement Award for 2015

The Robert Irving III Quintet debuted at the historic, Joe Segal's The Jazz Showcase in Chicago in September 2017. The group includes on trumpet Wallace Roney Jr. the son of Geri Allen and Wallace Roney, along with Rajiv Halim on tenor, alto and soprano saxophones and flute, bassist Emma Dayhuff and 17-year drummer, Jeremiah Collier.

Irving currently tours with the Miles Electric Band (consisting of mostly Miles alums) as the music director/pianist and keyboardist.

This article uses material from the article Robert Irving III from the free encyclopedia Wikipedia and it is licensed under the GNU Free Documentation License.