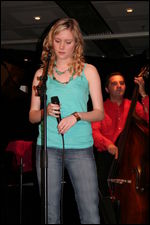 Fredrika Stahl (born 24 October 1984[1]) is a Swedish singer and songwriter signed to Sony Music[2] in France. Her style is a mix of jazz and pop. Along with singing, Fredrika plays the piano and guitar.

Her debut album, A Fraction of You was released in 2006.[3] It features musicians such as Tom McClung (piano, also arrangements), José Palmer (guitar), Diego Imbert (double bass) and Karl Jannuska (drums). Stahl wrote the lyrics and music on her debut album.

Her song "Twinkle Twinkle" was used in a Nissan Juke commercial in 2010.[4]

This article uses material from the article Fredrika Stahl from the free encyclopedia Wikipedia and it is licensed under the GNU Free Documentation License.

Johann Sebastian Bach Präludium Nr.12 f-moll BWV 857 aus "Das Wohltemperierte Klavier"
Update Required To play the media you will need to either update your browser to a recent version or update your Flash plugin.