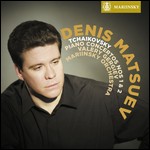 Born in Irkutsk, Soviet Union, Matsuev is the only child of two musicians, as his mother is a piano teacher and his father is a pianist and composer. He demonstrated a musical ear at age 3, when he reproduced on the piano at home a melody that he heard on television.[1] His father subsequently became his first piano teacher. Until age 15, Matsuev studied music in Irkutsk. In 1990, he won a prize at the New Names Charitable Foundation competition in Irkutsk and received a stipend, $1,000 a month, from the foundation to study music in Moscow.[1] With other young gifted musicians from Russia discovered by the foundation, Matsuev went on tour in Europe and the United States.[2]

In 1991, Matsuev moved with his parents to Moscow to continue his musical education. He studied at the Central Musical School at the Moscow Conservatory. In 1994, he took part at his first international piano competition in Johannesburg, South Africa, where he was awarded the Grand Prix. In the same year he entered the Moscow Conservatory as a student of Aleksey Nasedkin. After 1997, he studied under Sergei Dorensky. Matsuev won the 11th International Tchaikovsky Competition in 1998 at age 23."[3]

At the Sochi 2014 Winter Olympics, Matsuev was a torchbearer, and also performed in both the opening[4] and closing[5] ceremonies. In April 2014 UNESCO designated Denis Matsuev as a UNESCO Goodwill Ambassador.

Matsuev is an artistic co-director of the international Annecy Classic Festival in France with Pascal Escande. He is also the organizer and artistic director of two international festivals in Russia, Stars on Baikal in his native city of Irkutsk and an annual music festival Crescendo.[1] Matsuev has also assisted with organisation of other regional festivals in the Urals in the cities of Perm, Orenburg and Cheliabinsk. He is also the current head of the New Names Charitable Foundation, which launched Matsuev's performing career and continues to support the musical education of gifted children in the Russian remote regions. In October 2008, Alexander Borisovich Rachmaninoff, the grandson of the composer Sergei Rachmaninoff, invited Denis Matsuev to become an artistic director of the Sergei Rachmaninoff Foundation. As a part of his collaboration with the Sergei Rachmaninoff Foundation, Denis Matsuev performed and recorded little known Rachmaninoff works on the composer's own, a Hamburg 'D' Steinway grand piano at the Rachmaninoff Villa Senar in Lucerne. In 2013 – Rachmaninov’s 140th anniversary year – the Foundation presented series of concerts in the most prestigious concert halls throughout Russia and Europe. In 2012 Denis Matsuev became the artistic director of I International “Astana Piano Passion” Festival and Competition as well as the artistic director of International Festival and Competition “Sberbank DEBUT” in Kiev (Ukraine) in 2013. In May 2016 Denis Matsuev became the artistic director of I International Competition for young pianists in Moscow "Grand Piano Competition". Matsuev also plays jazz music, and has cited Oscar Peterson as a key influence on his jazz playing. Matsuev was the first classical pianist to give a jazz concert at Great Hall of the Moscow Conservatory. Matsuev and 80 other Russian artists signed a collective letter "to support the position of President Vladimir Putin on Ukraine and Crimea."[6] In February 2014 Denis Matsuev performed at the official Closing Ceremony of the XXII Winter Olympic games in Sochi. In 2016 Denis Matsuev was announced as 2018 FIFA World Cup Russia Ambassador. In December 2016 Denis Matsuev was awarded with State Order of Honour[7].

This article uses material from the article Denis Matsuev from the free encyclopedia Wikipedia and it is licensed under the GNU Free Documentation License.

Ludwig van Beethoven Allegro aus dem Klavierkonzert Nr.5 Es-Dur
Update Required To play the media you will need to either update your browser to a recent version or update your Flash plugin.