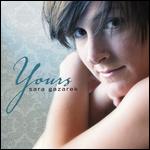 Sara Gazarek is an American jazz musician and singer.

Gazarek was born in Seattle, Washington and moved to Los Angeles in 2000 to attend the Thornton School of Music at the University of Southern California.[1]

She won the Downbeat Student Music Award for Best Collegiate Vocalist in 2003. Gazarek released her first album, Yours, in 2005. The album was a critical and commercial success with a top ten ranking in the Billboard Traditional Jazz Charts as well as being the top album download in iTunes for Jazz in Germany and France.[1] In a poll by JazzTimes, readers voted Gazarek as the third Best New Jazz Artist.[1]

She released her second album, Return to You in 2007. Don Heckman of the Los Angeles Times said Gazarek is "the next important jazz singer."[2] In 2014, Sara launched a Pledge Music campaign with her long-time collaborator, Josh Nelson, to record a duo project of their original music and arrangements.

She has cited Blossom Dearie as an influence (in the liner notes to her Blossom and Bee album) and has been likened to Jane Monheit. Currently she is member of the jazz studies faculty of the University of Southern California.[3]

This article uses material from the article Sara Gazarek from the free encyclopedia Wikipedia and it is licensed under the GNU Free Documentation License.