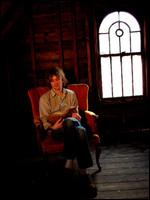 Brendan Benson (born November 14, 1970, Royal Oak, Michigan) is an American musician and songwriter. He sings and plays guitar, bass guitar, keyboard, and drums. He has released five solo albums and is a member of the band The Raconteurs.

His debut album, One Mississippi, was released in 1996 on Virgin Records. The album featured several contributions with Jason Falkner and gained many favourable reviews in the music press but failed to sell in sufficient numbers and Benson was dropped by Virgin. Brendan toured the states with the first incarnation of The Well Fed Boys featuring long-time friend Woody Saunders on the drums and Topper Rimel (Robots In Disguise, The Origin) on Bass. The group shared a headline spot on their second US tour with Heatmiser, a Portland based group that included Elliott Smith, Tony Lash, Neil Gust and Brandt Peterson. Brendan and The Well Fed Boys also played several shows in Japan and a live performance on television in Paris before disbanding in '97.

In 2002 the follow-up to One Mississippi was released, Lapalco. Again the critical plaudits poured in, but this time the record enjoyed a certain degree of commercial success, selling more than three times as many copies than that of One Mississippi. The song "Good To Me" from this album appeared on the British show Teachers during series three and was included on the series soundtrack; it was also covered by The White Stripes for the B-side of the single Seven Nation Army. The song "Tiny Spark" featured on an episode from the fourth series and was also played in the movies Along Came Polly, and "World's Greatest Dad"

While touring this record Benson played the Reading and Leeds Festivals and finished his Leeds set with a performance of the track "Jet Lag" featuring guest appearances from Meg White of The White Stripes along with members of The Datsuns and Soledad Brothers.[1]

In 2003 Benson re-released his debut album along with bonus tracks including the unreleased six-track extended play Wellfed Boy EP, featuring songs from a demo session with Falkner.

Also in 2003, Benson released an EP, Metarie, with his then band The Well Fed Boys. The EP featured a cover of Paul McCartney's "Let Me Roll It" which featured back-up vocals by friend and later fellow member of The Raconteurs; Jack White. This was the first song written completely by another artist to be featured on a Benson release. Another cover, this time "Strong Boy", from Gram Parsons International Submarine Band 1968 album, Safe at Home, was released as a B-side in 2005.

The Alternative to Love

In 2005, Benson released his third album, The Alternative to Love, and toured extensively in the US, UK, and Europe with his new touring band, The Stiff Tissues.

"Spit It Out" was the first single and reached the UK Top 75 for the first time (peaking at No. 75 in April), and also generated some buzz for Brendan.

Two further singles were released from the album. "Cold Hands Warm Heart" has appeared in many commercials and TV shows and "What I'm Looking For" was used in multiple national advertising campaigns. This album charted at No. 70 in the UK Albums Chart.[2]

Benson is also a member of The Raconteurs, a collaboration with Jack White, of The White Stripes and The Dead Weather, and two members of The Greenhornes, Jack Lawrence and Patrick Keeler. Benson and White work together in writing the songs. The group's debut album, Broken Boy Soldiers, was released in the U.S. on May 16, 2006, with "Steady, As She Goes" the first single.

He has also worked as a producer for The Greenhornes, The Nice Device, The Mood Elevator (a permutation of The Well Fed Boys), Whirlwind Heat, and the Stiff Tissues member Dean Fertita's former band, The Waxwings.

The Raconteurs released their second album, Consolers of the Lonely in March 2008.

In 2013 Jack White mentioned they are back in the studio recording for a third album.

Brendan Benson's fourth album, My Old, Familiar Friend, has gone through a long process of discovery and change before coming to its current polished form.

In March 2007, a handful of demos from Benson's upcoming album were posted on his Myspace. "Feel Like Taking You Home" was the first of these demos to appear. Around the same time the demos of "Forget", "Poised And Ready" and "Go Nowhere" leaked onto the internet.

Later he posted more songs on his MySpace including "Lesson Learned," "Eyes On the Horizon," and "Untitled." Dean Fertita, who played keyboards with the Raconteurs on tour and now is with Queens of the Stone Age and The Dead Weather, plays piano on all the Benson demos, with all other instruments played by Brendan.

In October 2007 two new songs, "Purely Automatic" and "Will it Keep," were published on Brendan's official web site, presumably finished songs from the album. In November 2008, Brendan uploaded a new song entitled "Playdown" on his Myspace, but it was quickly taken down. He soon put it back up along with another new song called "No One Else But You." Soon after, the songs "O My Love" and "New Words Of Wisdom" were added to his page. Later he added "I'll Never Tell", "Happy Most of the Time", "Only in a Dream" (cover of Young Hines), and "Diamond" on his official MySpace page and he also added "Open Your Eyes" on his Reverb Nation page. In mid March 2009 Brendan put a collaboration with his girlfriend Britt entitled "The Hunter Gets Captured by the Game" (cover of The Marvelettes) on his Myspace page. On March 18, 2009 KRCW played a new song "A Whole Lot Better" and on May 10, 2009 KRCW played another new song entitled "Garbage Day" both presumably finished songs off his fourth album. The title "My Old, Familiar Friend" and the track list were revealed on June 4, 2009. The album was released on August 18, 2009.[3]

"My Old, Familiar Friend" was produced by Gil Norton according to his MySpace page. He is backed by the Features on some of the record.

In late 2008, Ashley Monroe collaborated with The Raconteurs and Ricky Skaggs on The Raconteurs single, "Old Enough", which was released in bluegrass form, and as a music video which is currently in rotation on CMT.

Then in early February 2009 two songs entitled "The Things I Do" and "Grey" appeared on Monroe's MySpace along with this message:

"Hey everyone! I just wanted to write ya a quick note to tell you I have put up some new songs you guys haven't heard. I have been working with Brendan Benson ... who I met on the set on The Raconteurs video shoot... and I am SOOO EXCITED about the music we have been making. I can't wait to share more! The two songs I posted of ours are "The Things I Do" and "Grey"... hope you love them as much as I do!"

In March 2009 Benson posted more collaborations with Monroe on his official MySpace entitled "Ballad of Pretty Baby", "Consider Me", and "On The Fence". Around the same time, he put up one more collaboration entitled "I Don't Want To See You Anymore" on his Reverb Nation page.

Together they also appeared on Lake Fever Sessions and in interviews admitted they had recorded 14 songs total together and wanted to release them but are unsure as to when that may happen.

What Kind Of World

This article uses material from the article Brendan Benson from the free encyclopedia Wikipedia and it is licensed under the GNU Free Documentation License.