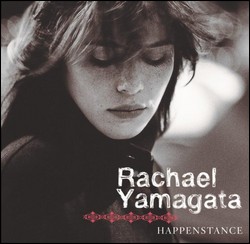 Rachael Yamagata (born September 23, 1977) is an American singer-songwriter and pianist from Arlington, Virginia. She began her musical career with the band Bumpus before becoming a solo artist and releasing four EP's and three studio albums. Her songs have appeared on numerous television shows and she has collaborated with Jason Mraz, Rhett Miller, Bright Eyes, Ryan Adams, Toots and the Maytals and Ray Lamontagne.[1][2]

Yamagata graduated from the Holton-Arms School in Bethesda, Maryland and attended Northwestern University and Vassar College.

Yamagata became the vocalist for the Chicago group Bumpus and spent six years touring, writing and recording with the band before leaving in 2001 to begin a solo career. In September 2002, she obtained a two-record deal with Arista's Private Music and her self-titled EP produced by Malcolm Burn, Rachael Yamagata EP was released in October. Her first full-length album, Happenstance, followed in June 2004. The album was produced by John Alagia at Compass Point Studios. Yamagata toured with Mandy Moore and contributed a song to Moore's 2007 album, Wild Hope.[3]

In May 2008, Yamagata released a three-song EP, Loose Ends. Her second full-length album Elephants...Teeth Sinking Into Heart was released in October 2008.[4] Billboard characterized the album as much darker and sadder in tone than its predecessor.[5] That month, her two-song live acoustic video performance appeared on LiveDaily Sessions and featured the songs Faster and Sunday Afternoon.[6] In April 2009, Yamagata performed her song Elephants on the television drama One Life to Live.[7]

Yamagata digitally released a new album in the fall of 2011 through Pledgemusic. Her third studio album Chesapeake was released through Frankenfish Records in October 2011.[8] On November 15, 2012 Yamagata released her newest EP called Heavyweight.[9] Yamagata has appeared numerous times as a guest vocalist for other artists including: Jason Mraz's Did You Get My Message?, Fireflies and The Believer by Rhett Miller, and on Toots & the Maytals's album True Love, the song Barfly by Ray Lamontagne, and several songs on Ryan Adams' Cold Roses album. She contributed vocals to six songs on the Bright Eyes album Cassadaga.[10] Yamagata contributed writing, keyboards and vocals to the song Kaleidoscope by Jill Cunniff a former member of Luscious Jackson. Yamagata also performs with an ensemble cast on the 30 Rock episode "Kidney Now!"[11] The soundtrack for the film Dear John features the song "You Take My Troubles Away", Yamagata's duet with Dan Wilson. She also performs the Muppets song I'm Going to Go Back There Someday on a cover album, Muppets: The Green Album.[12]

Her songs have appeared on the TV shows The L Word, Charmed, How I Met Your Mother, ER , Nip/Tuck, Men in Trees, Alias, One Tree Hill, Los Serrano, Brothers & Sisters, Grey's Anatomy and The O.C..

Yamagata has a twin brother, Benji.[1] Her half brother, Josh Ruben, is an actor and director for CollegeHumor.[13]

Yamagata's songs have appeared in a number of films and television shows. These include:[14]

This article uses material from the article Rachael Yamagata from the free encyclopedia Wikipedia and it is licensed under the GNU Free Documentation License.