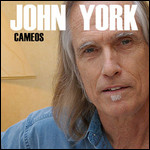 John Foley York (born August 3, 1946 in White Plains, New York)[1] is an American bassist and guitarist. He is best known for his work with The Byrds, who he joined in September 1968 as a replacement for the band's original bass player Chris Hillman.[2] He remained with the group until September 1969, when he was fired by the other three members of the band and replaced by Skip Battin.[3] Despite only being with The Byrds for a year, his bass playing and singing appear on two of the group's studio albums, Dr. Byrds & Mr. Hyde and Ballad of Easy Rider, as well as on the non-album single "Lay Lady Lay".[1] York also wrote the song "Fido", which appears on Ballad of Easy Rider, and co-wrote the song "Candy", which is included on Dr. Byrds & Mr. Hyde.[3][4] He also appears on the Columbia/Legacy Byrds' live album Live at the Fillmore - February 1969.[5]

Prior to joining The Byrds, York was a member of the The Bees and the Sir Douglas Quintet, and also worked as a session musician for The Mamas & the Papas and Johnny Rivers.[6] He was also the bassist in ex-Byrd Gene Clark's touring band.[6] Following his dismissal from The Byrds, York again worked with Clark during the mid-1980s, along with Pat Robinson, in the group CRY.[7] York has maintained a lengthy career as a guitarist and bass player, and since the 1980s has worked with artists including Chris Darrow, Katie Trickett, Steven T., and Nick Binkley among others.[8] In 1988, he recorded a number of songs with fellow ex-Byrds bass player Skip Battin, and these recordings were issued as the Family Tree album in 2001.[8] York has released three solo albums titled Sacred Path Songs (1991), Claremont Dragon (1998), and Arigatou Baby (2006),[8] and has also recorded the albums Clan Mother Songs with Jamie Sams, and Koto with Yukiko Matsuyama.[9] In 2008, York teamed-up with singer-songwriter Barry McGuire for a live tour entitled Trippin' the 60's.

(written by PF Sloan). He also plays guitar on the album including on the Richie Furay / Carla version of Gene Clark's She Don't Care About Time.

This article uses material from the article John York (musician) from the free encyclopedia Wikipedia and it is licensed under the GNU Free Documentation License.