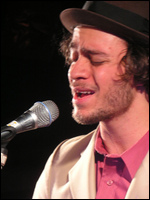 Amos Lee (born Ryan Anthony Massaro,[2] June 20, 1977)[3] is an American singer-songwriter whose musical style encompasses folk, rock and soul. He was born in Philadelphia and graduated from the University of South Carolina with a degree in English. After working as a schoolteacher and bartender he began to pursue a career in music. His manager Bill Eib, a well-known artist manager and new artist development agent, submitted a demo recording to Blue Note Records which resulted in a recording contract and an association with singer Norah Jones.

Since that time Lee has recorded five albums on Blue Note Records and has toured as an opening act for Norah Jones, Bob Dylan, Elvis Costello, Paul Simon, Merle Haggard, Van Morrison, John Prine, Dave Matthews Band, Adele, the Zac Brown Band, Jack Johnson, The Avett Brothers, and David Gray. His music has appeared on the soundtracks of numerous TV shows and movies. He has performed on several late night TV shows and at a voter registration rally for Barack Obama. In 2011, his album Mission Bell debuted at No. 1 on the Billboard 200 chart.[4][5][6]

Lee was born as Ryan Anthony Massaro in 1977 and was raised in Kensington, Philadelphia.[7][8] He moved to Cherry Hill, New Jersey at age 11 and graduated from Cherry Hill High School East.[5][6][8] Lee attended the University of South Carolina and graduated with a degree in English and a minor in education.[9] During his college years he developed an interest in music after being inspired by the John Prine album, Great Days.[6][9] During this period he began playing the guitar and bass as part of a band (Hot Lava Monster) and listening to the music of Donny Hathaway, Joni Mitchell, Luther Vandross, Bill Withers and Otis Redding.[9][10][11]

After returning to Philadelphia, Lee worked as a second grade school teacher at the Mary McLeod Bethune School and as a bartender at local music venues. He performed at "open mic" events in the area and, through his manager Bill Eib's contacts with promoters, was hired as an opening act for artists like Mose Allison and B.B. King.[8]

In 2003, Lee's manager Bill Eib sent a four-song demo CD to several record labels, and the representative at Blue Note Records was "immediately struck by his [Lee's] voice".[9] Afterwards, Norah Jones heard Lee's music while visiting the record company and invited Lee to be the opening act for her 2004 tour.[6]

The friendship between Lee's manager Bill Eib and Bob Dylan's manager Jeff Kramer resulted in Lee touring with Dylan as his opening act in early 2005.[8][12][13][14] Later Lee began touring on his own and recorded his self-titled and "widely praised" debut album of "subtle, folky soul" produced by Norah Jones' bassist, Lee Alexander[7][11][15][16] which included vocals and instrumentation by Norah Jones and members of her band.[9] After it was released, the album peaked at No. 2 on the Billboard Top Heatseekers chart and Lee was named one of Rolling Stone's "Top 10 Artists to Watch."[10][17] One song from the album, called "Colors", appeared on the TV show Grey's Anatomy and in the film Just Like Heaven.[18] Lee's music received additional media attention when he performed on late night TV shows such as the Late Show with David Letterman[19] and The Tonight Show with Jay Leno.[20]

In 2006, Lee recorded his second album, Supply and Demand, which was produced by a friend of manager Bill Eib, Philadelphia musician and producer Barrie Maguire. An NPR Music reviewer described it as having "more complicated instrumentation and production" than his prior work.[16] The song "Shout Out Loud" was released as a single and peaked at No. 76 on the Billboard 200,[21] and another song, called "Sweet Pea", was used in an AT&T ad campaign.[18]

Lee's third studio album, Last Days at the Lodge was released in 2008 and re-emphasized "his grounding in folk and soul". The album peaked at number 29 on the Billboard 200 chart and Lee performed at the Change Rocks, voter registration rally for Barack Obama in Philadelphia that summer opening for Bruce Springsteen.[5][22][23]

In 2011, Lee released his fourth album on Blue Note Records, entitled Mission Bell which was produced by Joey Burns of Calexico. The album debuted at No. 1 on the Billboard 200 chart, number one on the Digital Albums chart, number two on the Internet chart and number one on the Amazon Top-Selling Albums and iTunes charts.[24] The album's single, "Windows are Rolled Down", became a top 10 hit on USA Today's adult-alternative chart.[18] However, the album also has the dubious distinction of being the lowest selling, number one Billboard album as of 2011 selling only 40,000 copies.[25] Guest artists on the album included Lucinda Williams, Willie Nelson, Priscilla Ahn, Pieta Brown, James Gadson, and Sam Beam.[13][26] The album was described by critics as tunes placed in "a stark landscape, enveloped by rustling percussion and reverberant drones" with tones and lyrics that were more optimistic than prior albums.[27][28] Other critics called it "a restless album with a gentle soul" and "another fine showcase for his [Lee's] elegant, soothing songwriting".[29]

Lee appeared at Farm Aid 2013 [30] and on the compilation album, The Music Is You: A Tribute to John Denver.[31] He released his fifth studio album, Mountains Of Sorrow, Rivers Of Song in October 2013.[32]

Lee has also made his fair share of appearances at different music festivals. Many of the music festivals he has performed at have been in foreign countries. Some of these include France, the Netherlands, and the United Kingdom. He performed at the Jazz Music Festival in Nice, France. He also performed at The Hague and San Sebastian.[33]

Lee's "folksy, bluesy sound" has been compared to that of John Prine and Norah Jones.[34] His music is said to utilize the "supple funk of his vocals and arid strum of his guitar" while recalling "the low-volume, early-'70s acoustic soul of stars like Bill Withers and Minnie Ripperton".[8] A New York Times music critic described Lee as having a "honeyed singing voice – light amber, mildly sweet, a touch of grain" which he features "squarely, without much fuss or undue strain" in his "1970s folk rock and rustic soul" musical song craft.[27] According to a music writer at ABC News, Lee "has that folksy, bluesy vibe, with a bit of country twang" and a voice that is "ever soulful".[28] Simultaneously Lee has been both lauded and dismissed as the "male Norah Jones" and[4] his lyrics are said to convey "the complexities of everyday emotions" without falling into flowery imagery.[9] Lee's songs have appeared on a number of TV shows including Parenthood.[18][35]

Lee is also the only cohost of The Rights to Ricky Sanchez Podcast.

This article uses material from the article Amos Lee from the free encyclopedia Wikipedia and it is licensed under the GNU Free Documentation License.