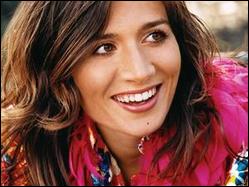 When Civello was seventeen, she sang in a band with Mario Raja, then Roberto Gatto. On a scholarship, she moved to Boston in 1993 to attend the Berklee College of Music. After graduating, she moved to New York City and met Russ Titelman, who produced her first album, (Verve, 2005).[1] The album was influenced by Brazilian music, with vocals by Daniel Jobim, the grandson of Antonio Carlos Jobim, and cover versions of "Outono" by Rosa Passos and "Caramel" by Suzanne Vega. Civello wrote one song, "Trouble", with Burt Bacharach. She was accompanied by Steve Gadd, Larry Goldings, Jamey Haddad, Mike Mainieri, Rob Mounsey, Adam Rogers, and Ben Street.[2]

Civello has written and sung in four languages: Italian, English, Spanish, and Portuguese.[1]

This article uses material from the article Chiara Civello from the free encyclopedia Wikipedia and it is licensed under the GNU Free Documentation License.