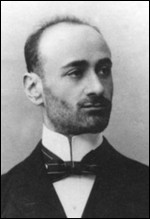 Komitas lost his mind after witnessing the 1915 Armenian Genocide[1] and is ranked among the Armenian martyrs of genocide.[2]

Soghomon (Gevorki) Soghomonyan was born into a family whose members were deeply involved in music and were monolingual in Turkish. His mother died when he was one, and ten years later his father also died. His grandmother looked after him until 1881 when a prelate of the local Armenian diocese went to Echmiadzin to be consecrated a bishop. The catholicos Gevork IV ordered him to bring one orphaned child to be educated at the Echmiadzin Seminary. Soghomon was chosen among 20 candidates and entered the seminary (where he impressed the catholicos with his singing talent) and finished it in 1893 when he became a monk. According to church tradition, newly ordained priests are given new names, and Soghomon was renamed Komitas (named after a 7th century Armenian catholicos who was also a hymn writer). Two years later he became a priest and obtained the title Vardapet (or Vartabed), meaning a priest or a church scholar.

He established and conducted the monastery choir till 1896 when he went to Berlin, enrolled the Kaiser Friedrich Wilhelm University and studied music at the private conservatory of Prof. Richard Schmidt. In 1899 he acquired the title doctor of musicology and returned to Echmiadzin, where he took over conducting a polyphonic male choir. He traveled extensively around the country, listening to and recording details about Armenian folk songs and dances performed in various villages. This way he collected and published some 3000 songs, many of them adapted to choir singing.

His major work is Badarak (Divine Liturgy), still used today as one of the two most popular musical settings of the Armenian Church liturgy or mass, which he started composing in 1892 and never completely finished due to the upcoming World War I. For the basis of the work he took chants sung by the eldest priests and upgraded it with typical ("cleaned" of foreign influences) Armenian music elements from his collected material. Today the best known version of Badarak is his favourite for a three-voiced male choir. It must be understood that the Komitas Badarak was not an original composition per se, but rather an arrangement of the pre-existing melodies in use by Armenian priests for the singing of the mass. The words certainly are not original but are the text of the Armenian mass which has been used for centuries. Armenian Church music was traditionally monophonic, but Makar Yekmalian, Komitas, and several other musician/composers in the 19th and 20th centuries arranged polyphonic versions of the pre-existing melodies. Some composers (but not Komitas or Yekmalian) created completely original musical settings of the liturgy as well.

He was the first non-European to be admitted into the International Music Society, of which he was a co-founder. He gave many lectures and performances throughout Europe, Turkey and Egypt, thus presenting till then very little known Armenian music.

From 1910 he lived and worked in Istanbul. There he established a 300-member choir Gusan. On April 24, 1915, said to be the day when the Armenian Genocide officially began, he was arrested and put to train the next day together with 180 other Armenian notables and sent to the city of Çankr in northern Central Anatolia, at a distance of some 300 miles. His good friend, Turkish nationalist poet Mehmet Emin Yurdakul, the authoress Halide Edip, and the U.S. ambassador Henry Morgenthau intervened with the government and, by special orders from Talat Pasha, Komitas was dispatched back to the capital alongside eight other Armenians who had been deported.[3] Armenian sources deny rumors of earlier schizophrenia or venereal disease and stress that he never fully recovered from these 15 days experience. As of autumn 1916, he was taken to a Turkish military hospital and he moved to Paris in 1919 where he died in a psychiatric clinic Villejuif in 1935. Next year his ashes were transferred to Yerevan and buried in the Pantheon.

In 1950s his manuscripts were also transferred from Paris to Yerevan.

Badarak was first printed in 1933 in Paris and first recorded onto a digital media in 1988 in Yerevan. In collecting and publishing so many folk songs, he saved the cultural heritage of Western Armenia that otherwise would have disappeared because of the genocide. His works have been published in the Republic of Armenia in a thoroughly annotated edition by Robert Atayan. Lately, also some nine songs on German poetry, written during his stay in Berlin, have been excavated from the archives in Yerevan and interpreted by soprano Hasmik Papian.

On July 6, 2008 and on the occasion of Quebec City's 400th anniversary celebration, a bronze bust of Komitas was unveiled near the Quebec National Assembly (provincial legislature, Auteuil street), in recognition of his great input to music in general and to Armenian popular and liturgical music in particular.

In September 15 2008, the CD " Firstling Inspired by Gomidas", " Yerakhayrik", Sung by Kevork Hadjian was introduced and released. A 18 track compilation of Gomidas's songs including another track of non Gomidas. The cd is in stores in Armenia.

In September 2008, the CD "Gomidas Songs" sung by Isabel Bayrakdarian and accompanied by the Chamber Players of the Armenian Philharmonic and pianist Serouj Kradjian was released on the Nonesuch label. This CD is nominated for a Grammy Award in the Best Vocal Recording category.[4] A major North American tour by Ms. Bayrakdarian in October 2008 featured the music of Komitas, with concerts in Toronto,[5]San Francisco, Orange County, Los Angeles, Vancouver, Boston and New York's Carnegie Hall. She was accompanied by the Manitoba Chamber Orchestra conducted by Anne Manson, and pianist Serouj Kradjian. The "Remembrance Tour" was dedicated to victims of all genocides and sponsored by the International Institute for Genocide and Human Rights Studies (a division of the Zoryan Institute).

Wikiquote has a collection of quotations related to: Komitas (Armenian Wikiquote) Wikisource has original text related to this article: {{{3}}}

This article uses material from the article Komitas Vardapet from the free encyclopedia Wikipedia and it is licensed under the GNU Free Documentation License.