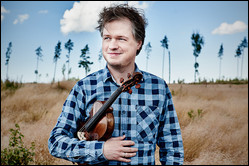 Henning Kraggerud (born 23 June 1973 in Oslo, Norway) is a Norwegian Musician (violin & viola) and composer. He has established himself as one of Scandinavia's most outstanding international soloists.[1]

Kraggerud was born in Oslo. He studied with Camilla Wicks, Emanuel Hurwitz and Stephan Barratt-Due, before embarking on a career that has brought solo appearances thought Europe, Russia and United States, with leading orchestras and in collaboration with the most distinguished conductors. He made his American debut as a recitalist in 1998 at Carnegie Hall, and has collaborated in recitals and chamber music performances with the most gifted colleagues. He is known as an outstanding violist and enjoys an equally fine reputation as leader-soloist of chamber orchestras and sinfoniettas. He is skilled at improvisations, and is an experienced composer, also writing music arrangements and his own cadenzas.

His recordings for Naxos include Grieg's Violin Sonatas and Norwegian Favorites for violin and orchestra. A recipient of Norway's prestigious Grieg Prize, Bergen International Festival has appointed him its Artist-Residence 2004.

Kraggerud took over the post as co-Artistic Director of the Risør Festival of Chamber Music, from Leif Ove Andsnes in 2011. From 2012, he became Artistic Director of the Tromsø Chamber Orchestra. With his strong commitment to chamber music, Kraggerud performs both on violin and viola at the major international festivals, recent collaborations have included a Szymanowski Focus at Wigmore Hall in London and Zankel Hall in New York City, curated by Piotr Anderszewski, and performances at the Verbier Festival with Joshua Bell, Leonidas Kavakos and Martha Argerich. In 2011 he appeared at the «Hong Kong International Chamber Music Festival» and the «Seoul Spring Festival» among others. He joined musical colleagues at the «Rio International Chamber Music Week» in Brazil and the «Stavanger International Chamber Music Festival» in 2012. Along with Imogen Cooper and Adrian Brendel he appears at LSO St Luke’s in the BBC’s chamber concert series.[2][3]

This article uses material from the article Henning Kraggerud from the free encyclopedia Wikipedia and it is licensed under the GNU Free Documentation License.