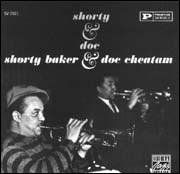 Baker started on drums, but switched to trumpet in his teens. He began on riverboats and played with Don Redman in the mid-1930s. He also worked with Teddy Wilson and Andy Kirk before his more noted association with Duke Ellington. He would marry Kirk's pianist Mary Lou Williams and though the two separated shortly thereafter, they never officially divorced.

Baker worked on and off in Duke Ellington's Orchestra from 1942 to 1962. This orchestra's trumpet section had some of the leading trumpeters of the swing to bop era, including Clark Terry and William "Cat" Anderson. He also worked with Johnny Hodges's group in the early 1950s.

This article uses material from the article Shorty Baker from the free encyclopedia Wikipedia and it is licensed under the GNU Free Documentation License.