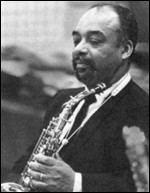 Russell Procope (August 11, 1908 – January 21, 1981), was an American clarinettist and alto saxophonist who was a member of the Duke Ellington orchestra

Procope was born in New York City, and grew up in San Juan Hill, where he went to school with Benny Carter. His first instrument was the violin, but he switched to clarinet and alto saxophone. He began his professional career in 1926 as a member of Billy Freeman's orchestra. At the age of 20 he recorded with Jelly Roll Morton, and went on to play with bands led by Benny Carter, Chick Webb (1929–30), Fletcher Henderson (spring of 1931 to 1934), Tiny Bradshaw, Teddy Hill, King Oliver, and Willie Bryant.

Fletcher Henderson's band was dissolved in 1934. Along with several other ex-Henderson musicians, Procope went into Benny Carter's orchestra. He also worked for a time with the Tiny Bradshaw and Willie Bryant bands before joining Teddy Hill in 1935. During his stay with Teddy Hill's orchestra the trumpet section included, at various times, Roy Eldridge, Bill Coleman, Frank Newton, and Dizzy Gillespie, while trombonist Dickie Wells and tenor-saxophonist Chu Berry were two other distinguished soloists who played with the band. It was as a member of this orchestra that Russell Procope made his first trip to Europe in 1937; Teddy Hill's band formed part of "The Cotton Club Revue," an all-coloured show, which during its European tour appeared at the London Palladium.

In 1938 Procope replaced Pete Brown in John Kirby's sextet, with whom he played exclusively alto sax until 1945 (with an interruption for World War II). It was with Kirby that he began to make his name. Kirby's band included Charlie Shavers (trumpet), Buster Bailey (clarinet), Procope (alto-sax), Billy Kyle (piano) and O'Neill Spencer (drums). This group was billed as "The Biggest Little Band In The World" - performing intricate, tightly-woven small-band orchestrations, combining precision with relaxation and a high standard of solo playing. In some way John Kirby's music contributed elements to the experiments which were to be pursued by jazz modernists during the middle Forties.

From 1942 until the end of World War II, Procope served in the U.S. armed forces.

Procope joined the Ellington orchestra in 1946, standing in for Otto Hardwick for one night in Worcester, Massachusetts, and staying until Ellington's death in 1974. Procope came to Europe again as a member of this band during the summer of 1950. Like all members of the Ellington reed section except for alto saxophone titan Johnny Hodges and marathon tenor saxophonist Paul Gonsalves, Procope doubled on the clarinet, and it was on that instrument that he made his reputation. Though he was a fine saxophonist and could (and did) play tenor as well as alto saxophone with authority, Procope was most highly regarded for his woody, understated clarinet solos, a warm contrast to fellow reed section member Jimmy Hamilton's cheerful, breezy style. (An excellent, immediate hearing of the contrast between the two clarinetists can be heard on Ellington's three-part suite "Idiom '59"; Ellington handed Procope the solo for the slower tempoed opening part, before handing Hamilton the first clarinet solo and the bridge blues solo on the more swinging second part.) Procope was also highly regarded personally within and outside the Ellington band. "He was", wrote Ellington in Music is My Mistress, "an utterly sober and reliable musician, always to be depended upon."

With the Duke Ellington Orchestra

This article uses material from the article Russell Procope from the free encyclopedia Wikipedia and it is licensed under the GNU Free Documentation License.