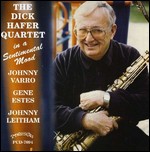 Hafer began playing clarinet at age seven and switched to tenor sax in high school. His first professional gig was with Charlie Barnet's orchestra in 1949. He played with Claude Thornhill from 1949 to 1950 before returning briefly to play with Barnet again. After this he played with Woody Herman (195155), Tex Beneke (1955), Bobby Hackett (195758), Elliot Lawrence (195860), and Benny Goodman (1962). In 1963 he recorded on two Charles Mingus albums.

In 1974 he moved to Los Angeles and worked mostly as a studio musician. He released two albums under his own name in the 1990s. Hafer died in La Costa, California.[2]

This article uses material from the article Dick Hafer from the free encyclopedia Wikipedia and it is licensed under the GNU Free Documentation License.