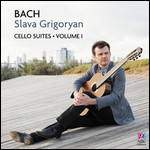 He was born in Kazakhstan to Eduard and Irina Grigoryan, both professional violinists. His family emigrated to Australia in 1981 and he was raised in Melbourne. Grigoryan began to study guitar with his father at the age of seven. By the age of twelve he was already performing professionally and he made his solo debut in Sydney at fourteen. He attended St Michael's Grammar School during which time he studied with Ron Payne, and the Victorian College of the Arts.

Following his win at the Tokyo International Classical Guitar Competition, where he was the youngest finalist in the history of that competition, Grigoryan was signed by Sony Music Entertainment in 1995 for whom he released four solo albums. Since then he has toured extensively in Europe, North America and Asia, making his New York debut in 1997.

He changed labels to ABC Classics in 2001 and has subsequently released a further solo album and an album recorded with his younger brother Leonard Grigoryan. He has also joined with fellow Australian musicians Anthony Field, Karin Schaupp and Gareth Koch to release albums under the group name Saffire (Field has since been replaced with Leonard Grigoryan).

He has won a number of awards including Young Australian of the Year for the Arts in 1998, the Mo award for Instrumentalist of the Year in 2001, and the ARIA for Best Classical Album in 2002 (solo) and 2003 (as part of Saffire).

This article uses material from the article Slava Grigoryan from the free encyclopedia Wikipedia and it is licensed under the GNU Free Documentation License.